Victoria’s killer for bikes. There’s so many amazing options within the city limits – some of which we’ve highlighted here – but, no matter how much is available, it’s always easy to fall into routines, to do the same rides all the time, or every year. Summer, though, is the time to break out of routine; to explore, expand, and try new things. It’s also the ideal time to slow down, to add some mid-ride stops instead of just hammering past any and all points of interest. This is definitely easier when the suns out, and you’re not wearing seven soaking layers over a soaking wet chamois. So, for this Rides post we’re headed to a nearby part of the island you’ve probably driven by, and should definitely slow down to find out more about. Seeking out snacks, swims and sips, Max, Liz, Rowan, and I visit Shirley, BC. 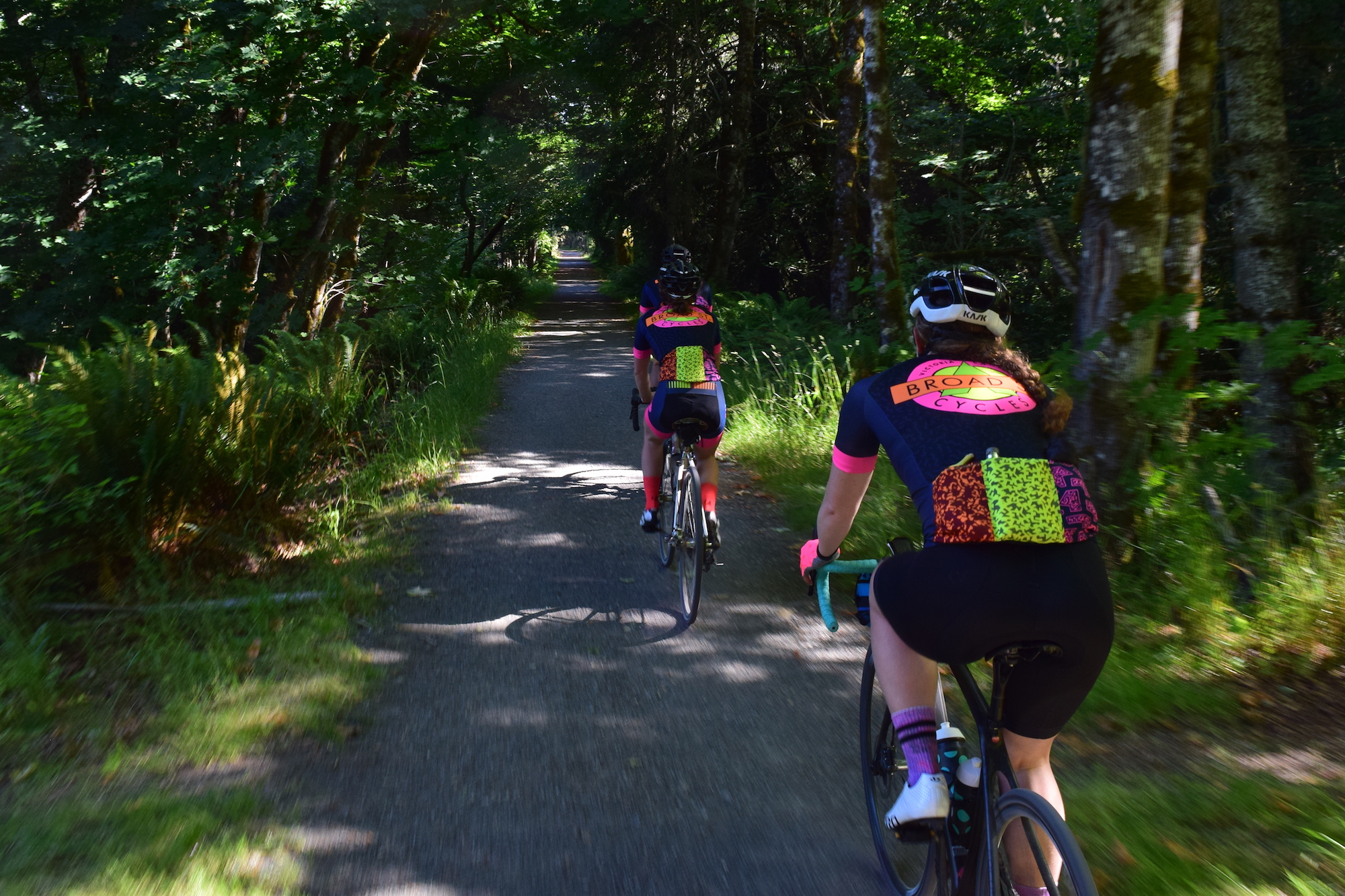 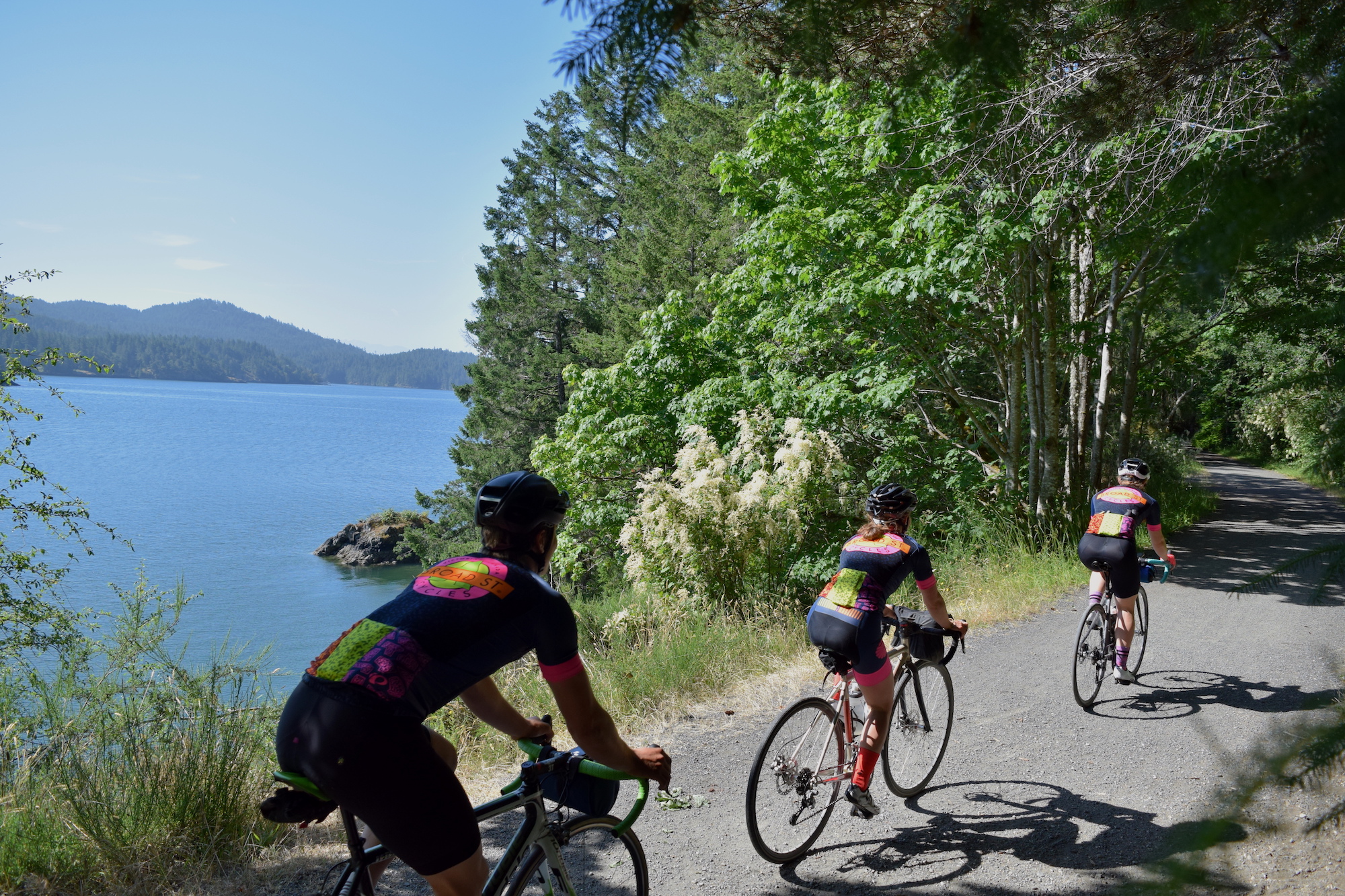 Sitting just beyond Sooke, if you’re headed toward Port Renfrew, there’s a row of modest houses hugging close to the ground in the manner of windblown shoreline trees, wedged between Highway 14 and the cold waters of the Strait of Juan de Fuca. It’s a landmark immediately recognizable to anyone whose traveled that route, though one that usually marks a midpoint of a longer journey and not a destination in itself. That row of houses marks the boundary between Otter Point and the town of Shirley, which our quartet of cyclists had set out early … ok, early-ish that morning to reach. Our itinerary had a few stops on it but, having left Victoria a couple hours and 60+km ago without breakfast, we were all very eager for the first target: Shirley Delicious Cafe. On top of the expected row of houses, there was a Da Vinci’s Code worth of signs that we needed a rest: tummy rumbles, bigger gaps between us on each of the many hills, Max mis-hearing every other word as a potential next meal, and, finally, a vulture choosing to alight from snacking on a roadside racoon to follow alongside my shoulder. When you look like an easier meal than roadkill, it’s time for a snack stop. 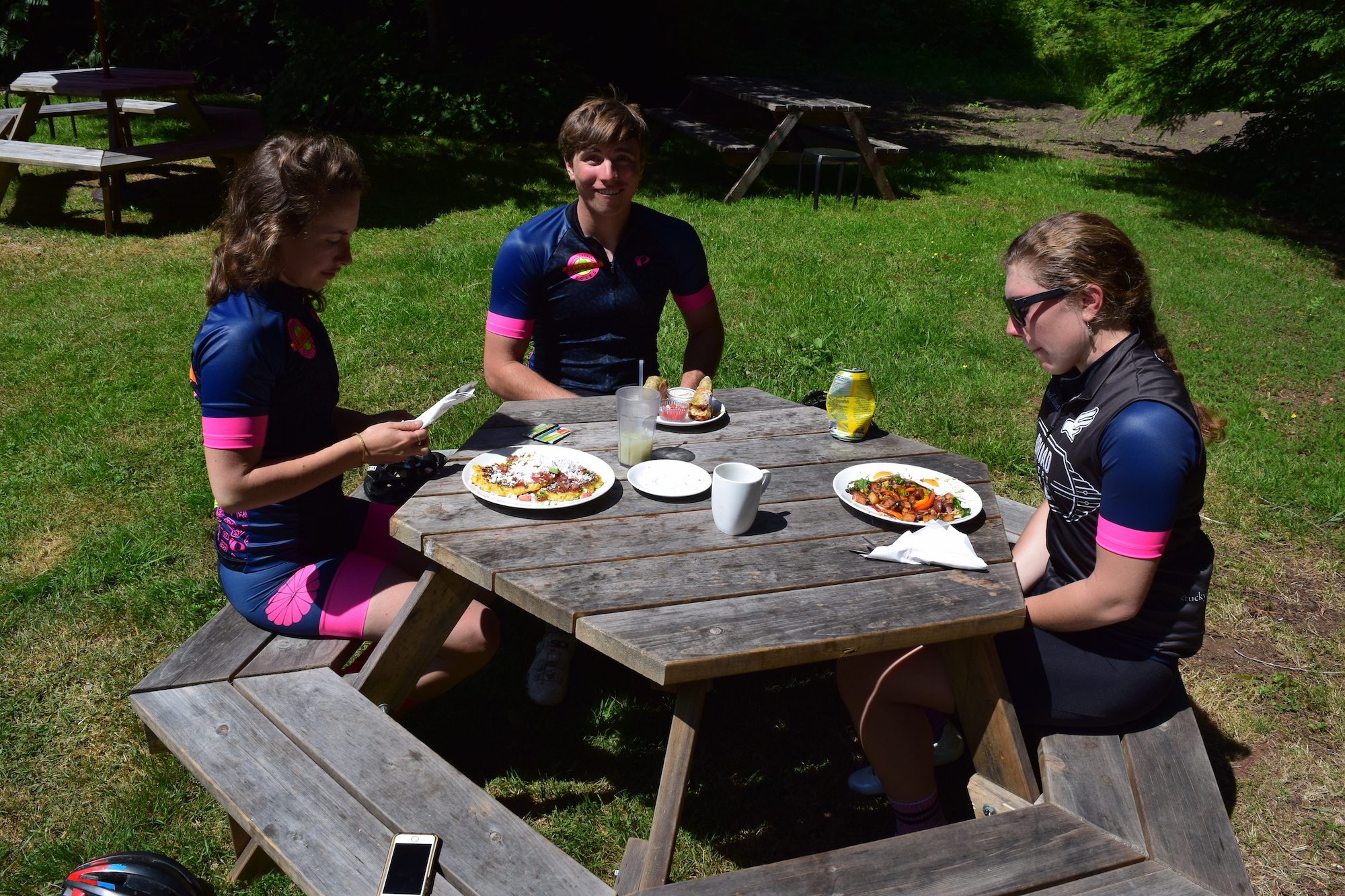 Tucked just off the 14, Shirley Delicious Cafe doesn’t look like too much as you approach from the main road, but it opens up into an expansive back patio, with tables and nooks spread across the back lawn. The Cafe’s profile may be unassuming, but everything inside is outsized. Delicious coffee – essential – is matched by creative and delicious breakfast offerings. Among our selections were a carmelized apple pork sausage roll, and delicious corn fritters with avocado, parmesan and cilantro. The food was devoured quickly, and, after a bit of lawn lounging to catch our breath and stretch the legs, we were rolling again, fed and happy. 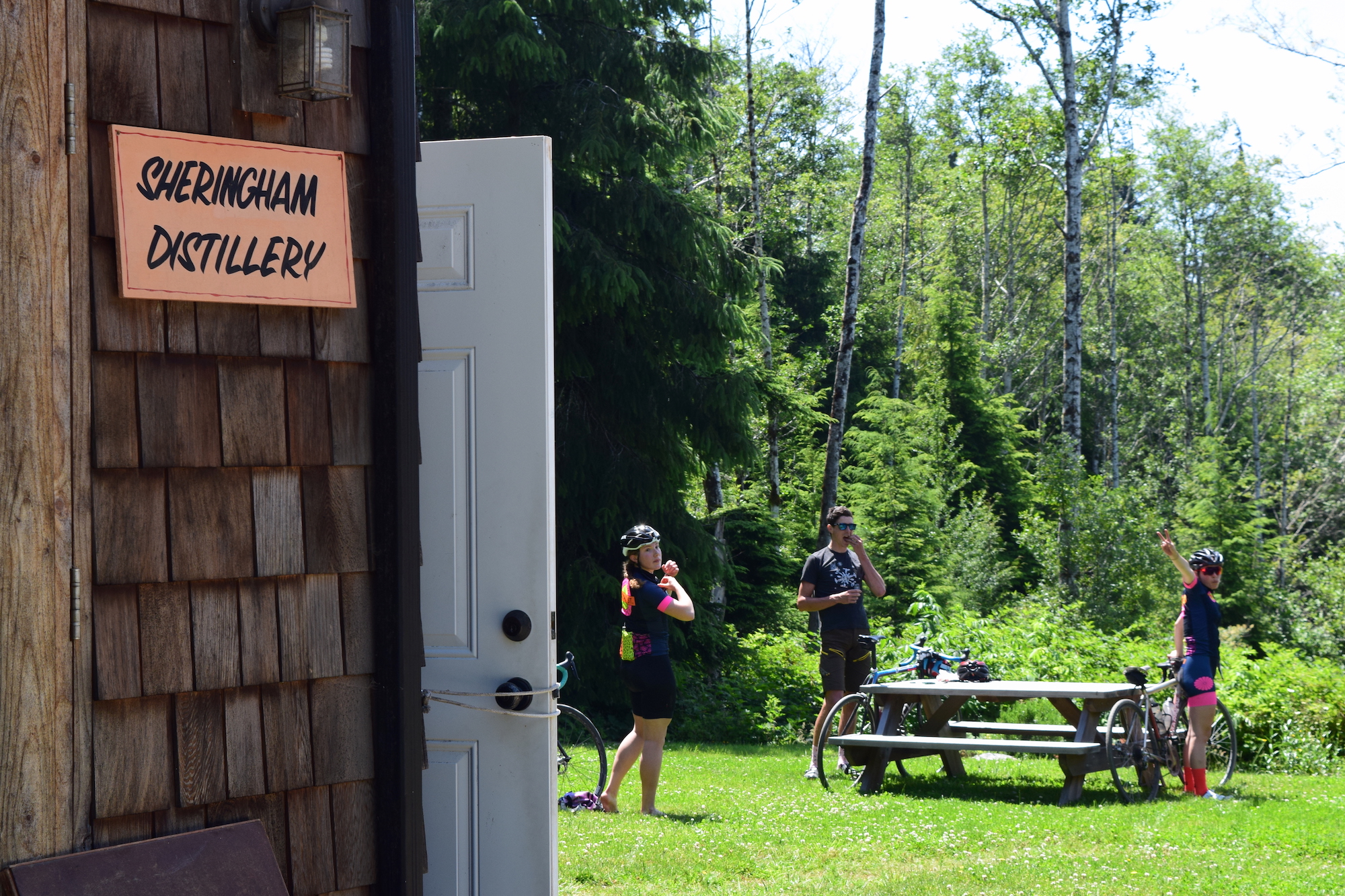 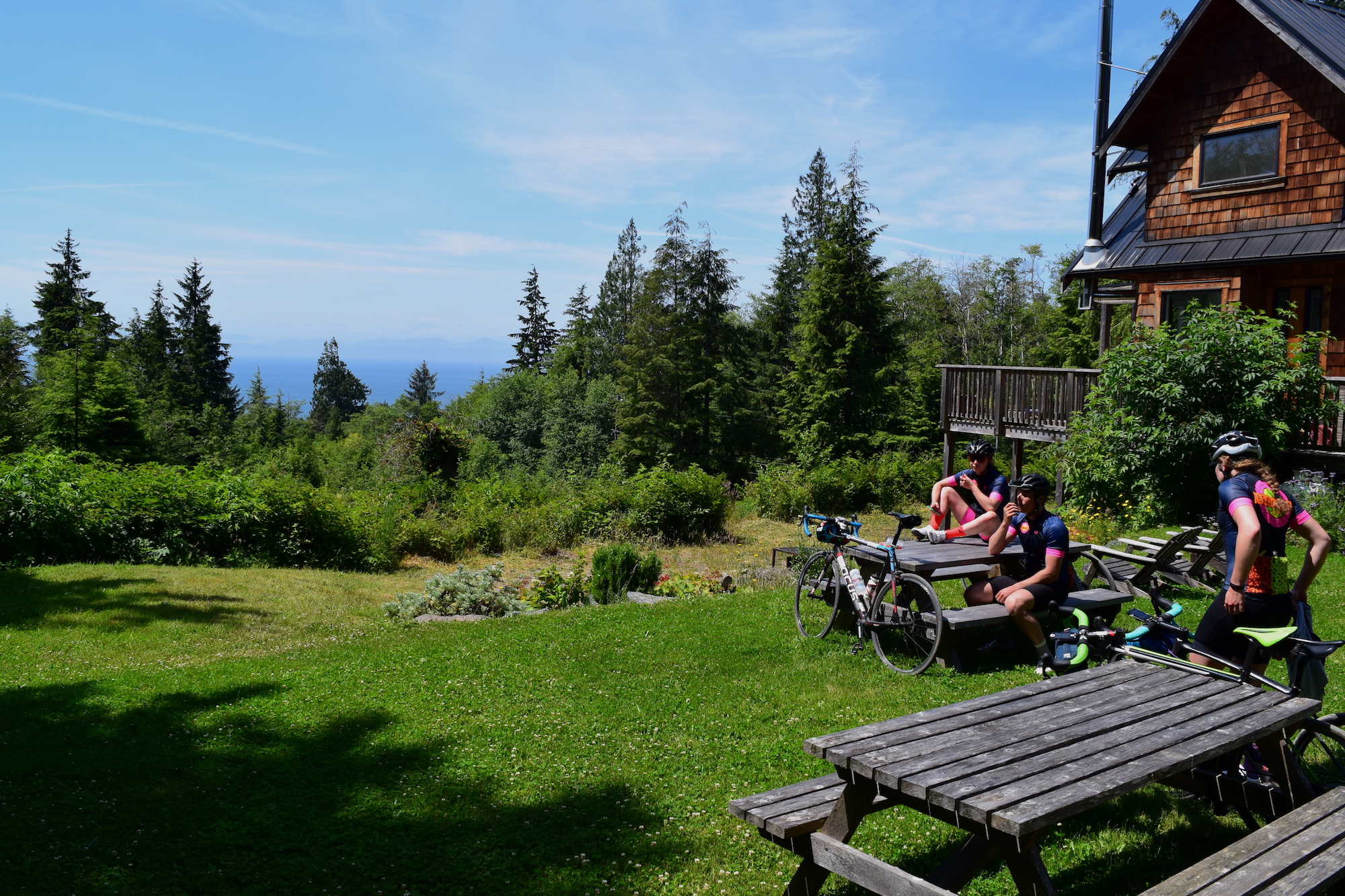 With some helpful routing advice from the awesome people at Shirley Delicious, we continued west toward Shirley’s newest craft spirits operation: Sheringham Distillery. A short ride off the highway on Seaside Drive, Sheringham Distillery sits nestled at the top of a long gravel driveway. We’re a bit early for our tour, so we take advantage of the tasting room lawn furniture to snack on sour jujubes and take in the incredible ocean and Olympic Mountain views. Sheringham may be new on the scene, but they’ve tapped into the area’s long history of small distilleries – though they’re much more above board than their prohibition era rum running predecessors. They’ve quickly established a reputation for creative takes on classic spirits, such as their botanically delicious Seaside Gin and west coast tinged nordic Akvavit, as well as simple, impressively tasty versions of familiar fare, like their vodka. Seriously, try their vodka. While you can find Sheringham spirits around town, it’s absolutely worth the trip out to their tiny barn-like distillery for a tasting and tour. They took time out of their busy, 13 hour day to talk us through the entire distilling process between samples of their different spirits, from local and BC sourced ingredients – including hand harvested winged kelp from just down the street – to their in house bottling of the finished product, which was awesome. But, booze nerds take note, Sheringham also consistently turns out small batches of unique or one-off spirits that you won’t find on shelves. While we were there, they we’re serving Castaway Gin: a burbon barrel aged gin that they only made a single batch of. Tours run Saturday and Sunday. If you’re going, take us with you. 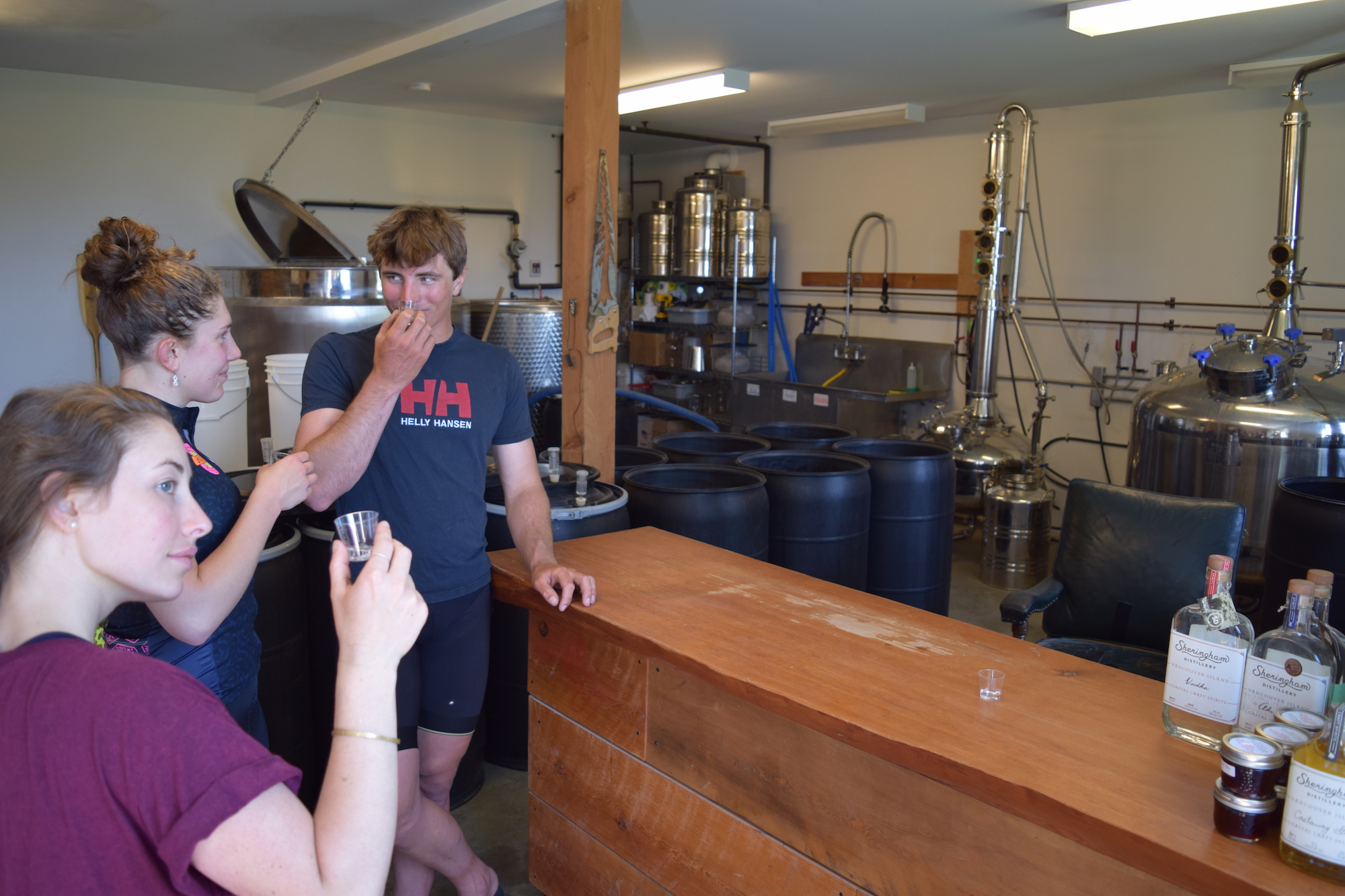 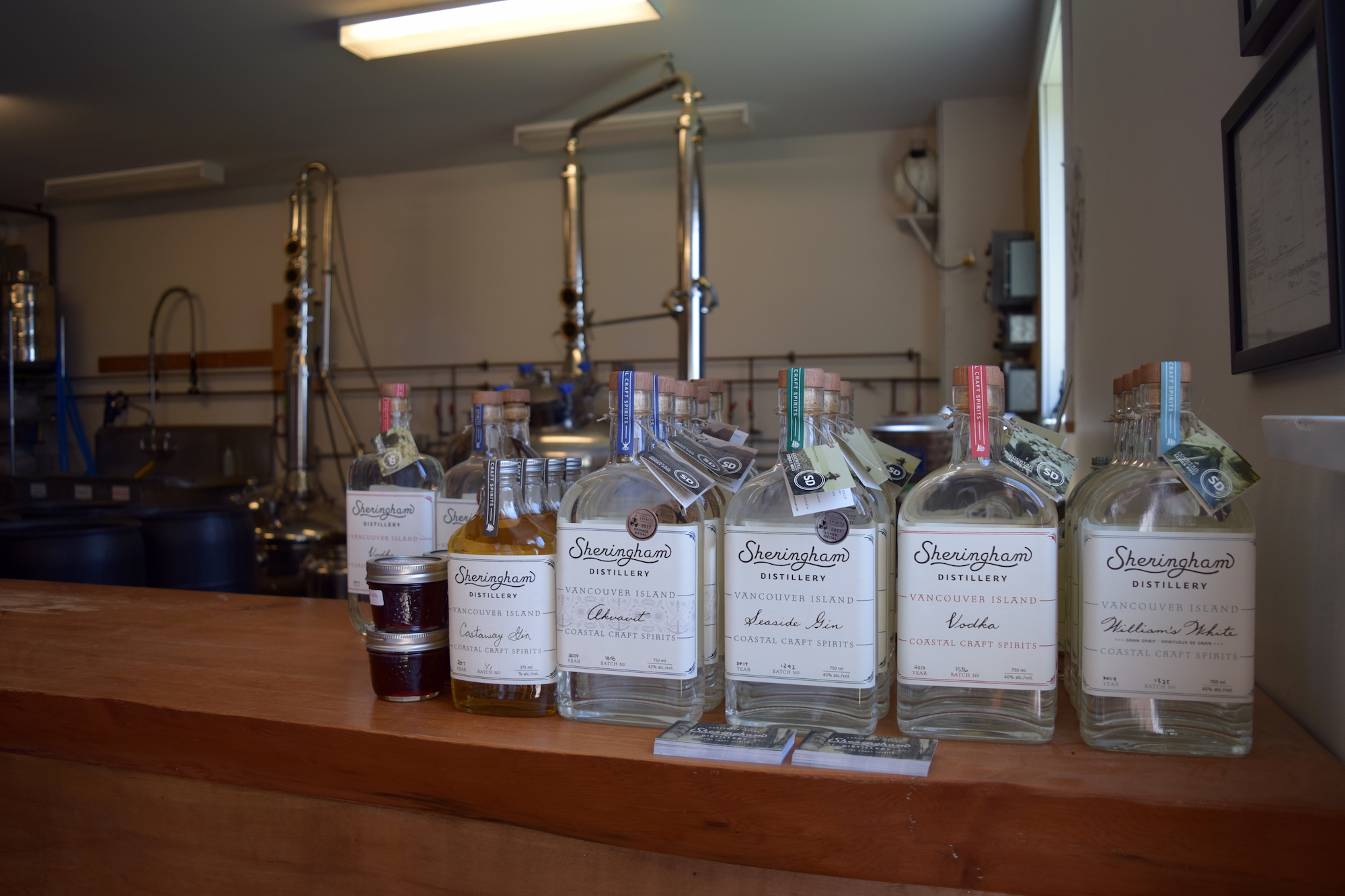 From Sheringham Distillery, we rolled the short distance down Seaside Drive to the distilleries namesake: Sheringham Point Lighthouse. The lighthouse was built in 1912, following a shipwreck of the SS Valencia in 1906 en route from San Francisco to Victoria and Seattle. While it is now fully automated, the Sheringham Point Lighthouse Preservation Society has been working steadily to make document its history, and to make it accessible to the visitors. Situated on a rocky outcropping, with views along the Vancouver Island coastline in both directions, its a great place to stop for a snack to help soak up all the booze you just consumed. And rest up for your next stop: Tugwell Creek Honey Farm and Meadery. 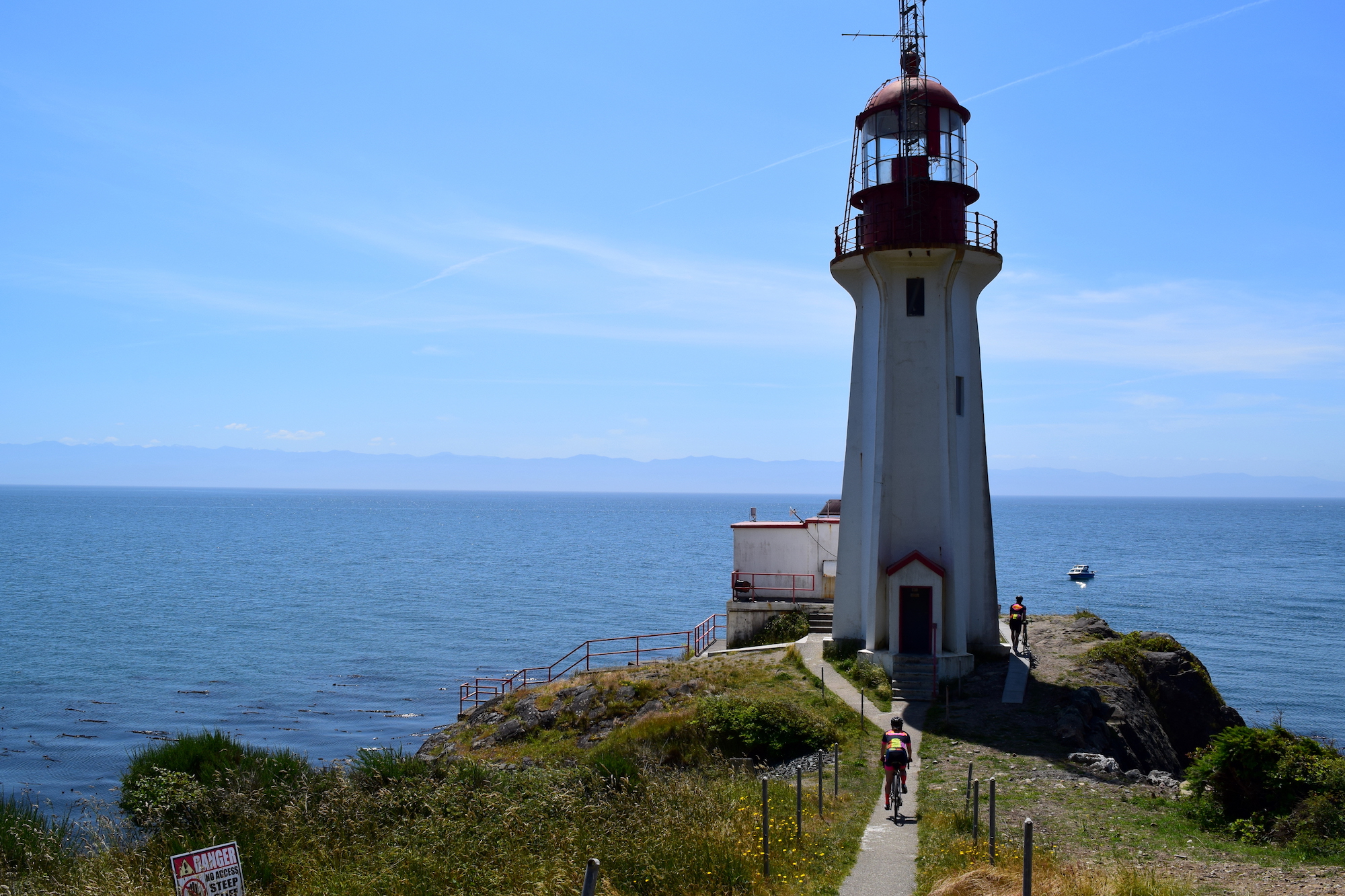 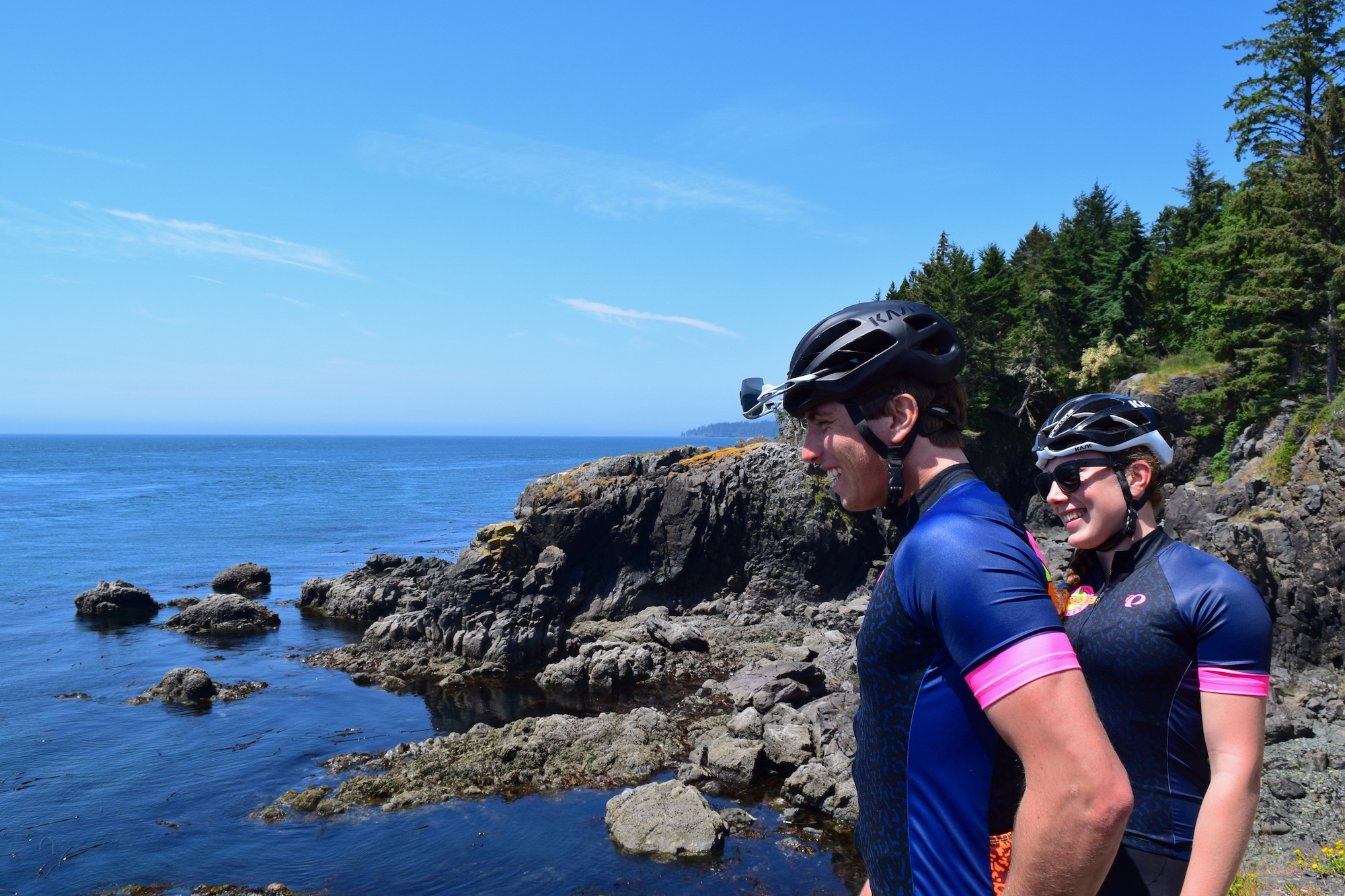 Since we were only tipped off to the Tugwell Creek that morning when we stopped at Sooke Mountain Cycle to fix a flat, so we didn’t have time to add it to our trip. Plus, Max’s enthusiasm waned when he realized that, in his advanced state of hunger, he’d misheard ‘meatery,’ instead of meadery, so there’d be no actual meat products. (SMC guys did say there’s a full brewery coming to Sooke soon that’ll be better equipped to handle your mid-ride hunger, but no word on when that opens). Instead, we booked it back along HWY 14 to the Goose and back toward town. But not before stopping at Matheson Lake for a mid-ride swim to rinse off the days dust. 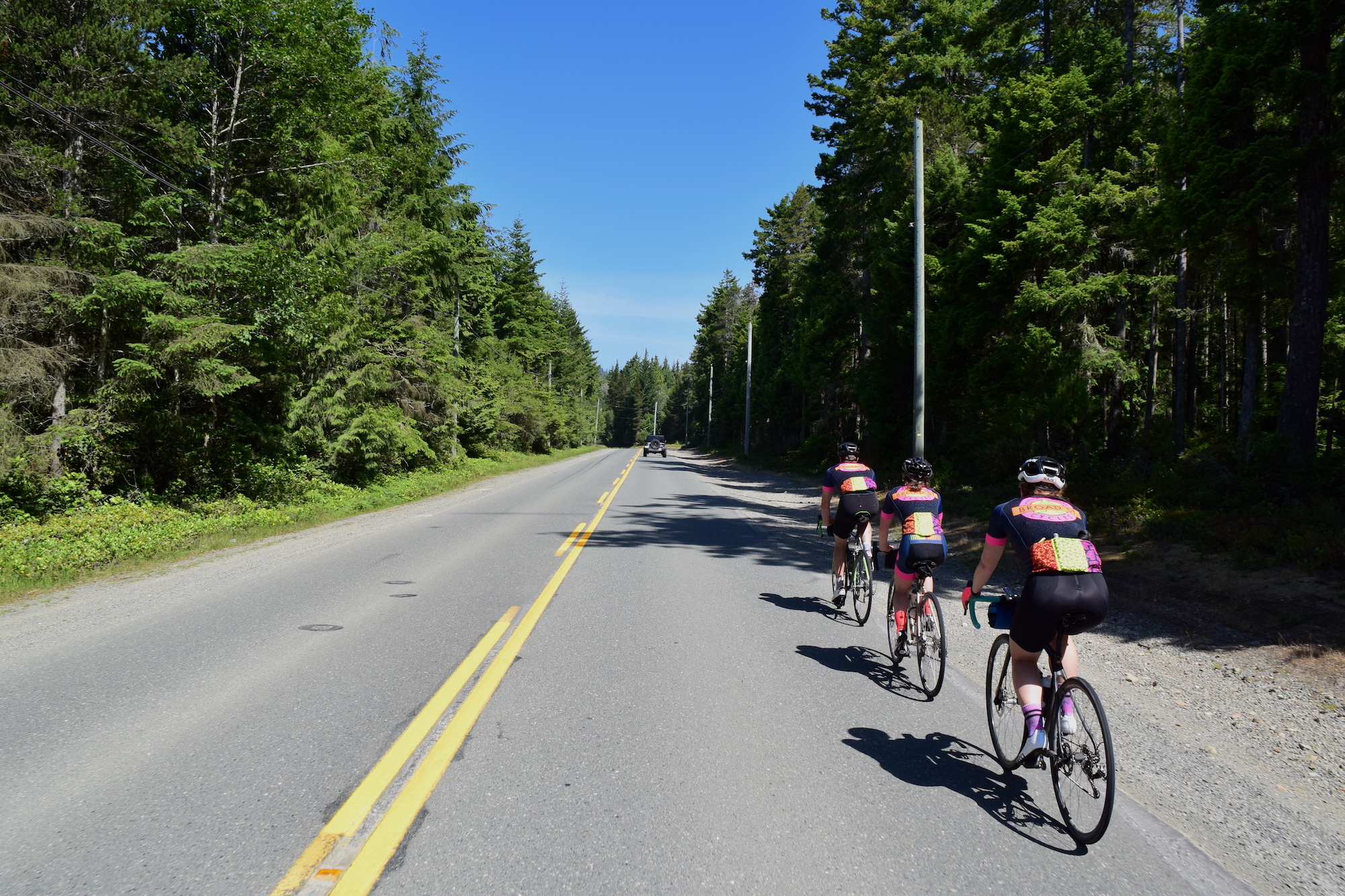 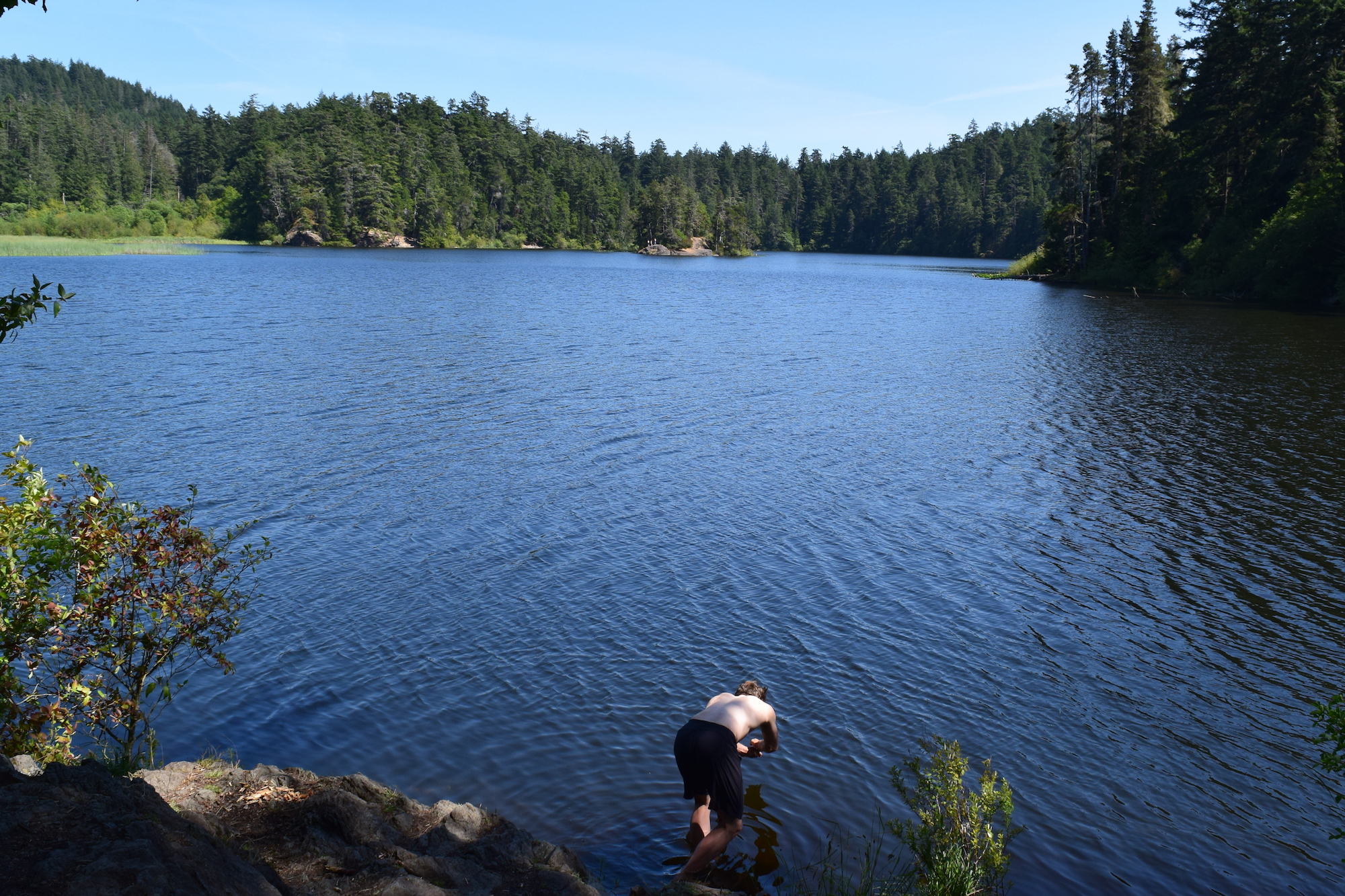 There’s all sorts of options for how you get to Sooke but, after that, it’s pretty much the highway or … the highway. Grant Rd. is a nice quiet cut through Sooke. Or if you want to add a couple miles and stay off the road, you can take Otter Point Road all the way out to where Tugwell Creek is. From Shirley Delicious Cafe we followed 14 again to Sheringham Distillery. From there, you can take a little gravel path back to Sheringham Point Road, and Shirley Delicious Cafe. This will save you some traffic and elevation before you get back on the highway. Given how much time you’ll spend on the 14, we decided to stick to the Goose as much as possible. It adds a couple kilometers, but it’s quiet, you can’t beat the views, and there’s places to stop and swim along the way.

Since it is a good, full day trip, be sure to leave yourself time, and pack some snacks for the road. We all brought bar bags with some extras, like sandals, t-shirts and shorts. Once your out in Shirley, the distances between stops are relatively short and it’s nice to not be eating and sipping in spandex. I mean, we all love spandex, but you’ll get a good couple hours of chamois time in on the ride to and from town. Liz and I had bags from Ornot, while Max had a Victoria made Farsik bag and Rowan had one from Timbuk2. This made the entire day comfortable, and snack filled. Even if you want to shorten the distance and start in Sooke, a bag for snacks and a change of clothes isn’t a bad idea. 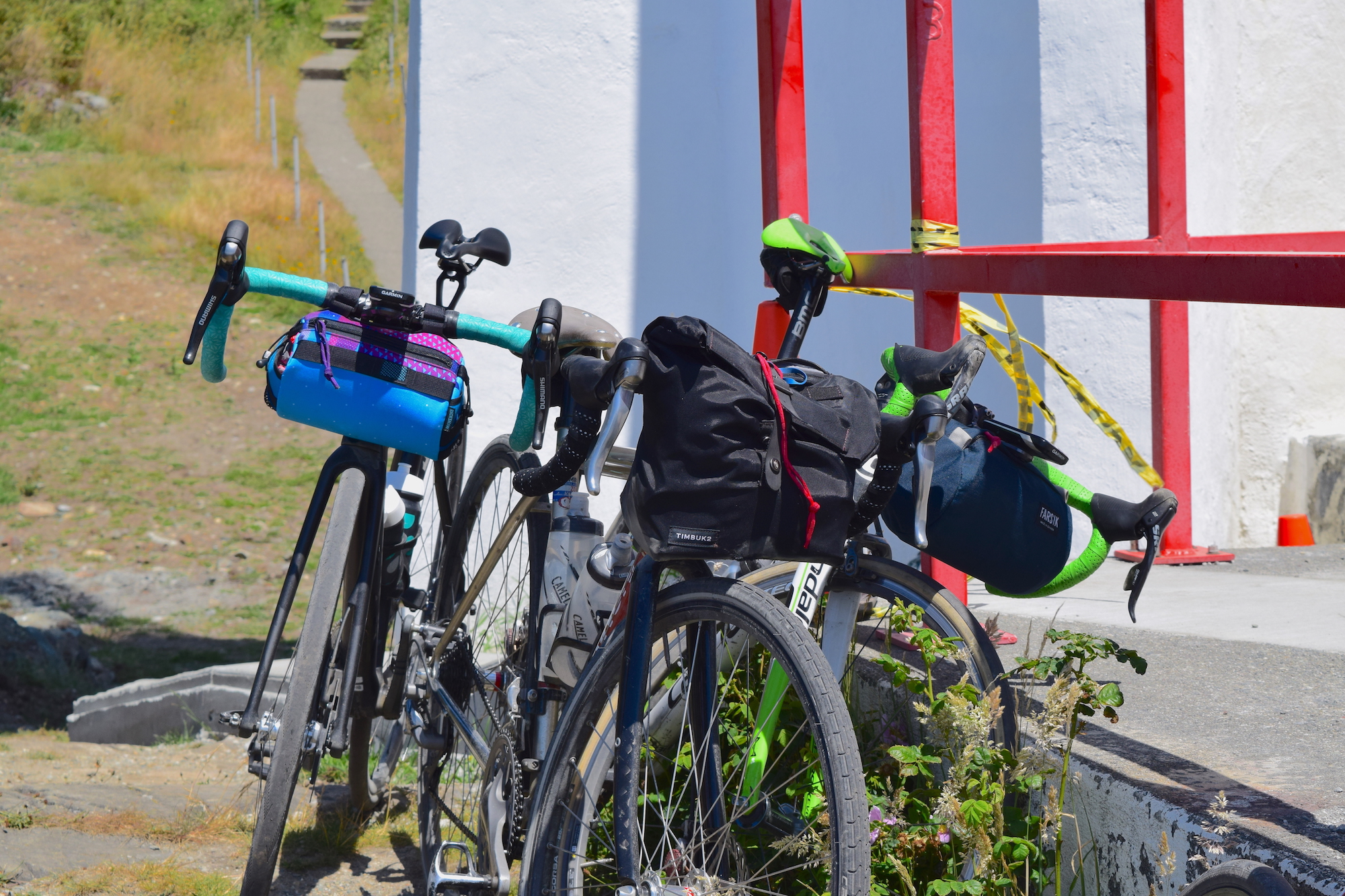 Full ride data is below but, as mentioned, there’s all sorts of route options!