It’s not often any more that you see a major name in cycling clearly stamping “Made in Italy” (or America, Canada, Germany, or France, for that matter) front and center on their frames. There was a brief period of objection, somewhere between murmuring and outcry, when the arrival of affordable carbon frames resulted in production shifting to Asia, but most people were quite happy to quietly accept their sub-15lb. bicycles and get back to riding. While there are a number of small shop and boutique frame builders (Hi Sam! ❤️ U!) very, very few industry staples offer a frame made in their home country. Colnago, eventually, followed suit and moved the majority of their production out of Italy. Except, that is, for their marquee ‘C’ series bikes, like Ty’s Colnago C60. During Giro d’Italia we looked at beautiful steel Colnago Tecnos ridden by Raph and Marty. So, with Le Tour and Giro Rosa both raging through the streets of Europe, it seemed like the right time to check in with Ty, and his gleaming white Colnago. 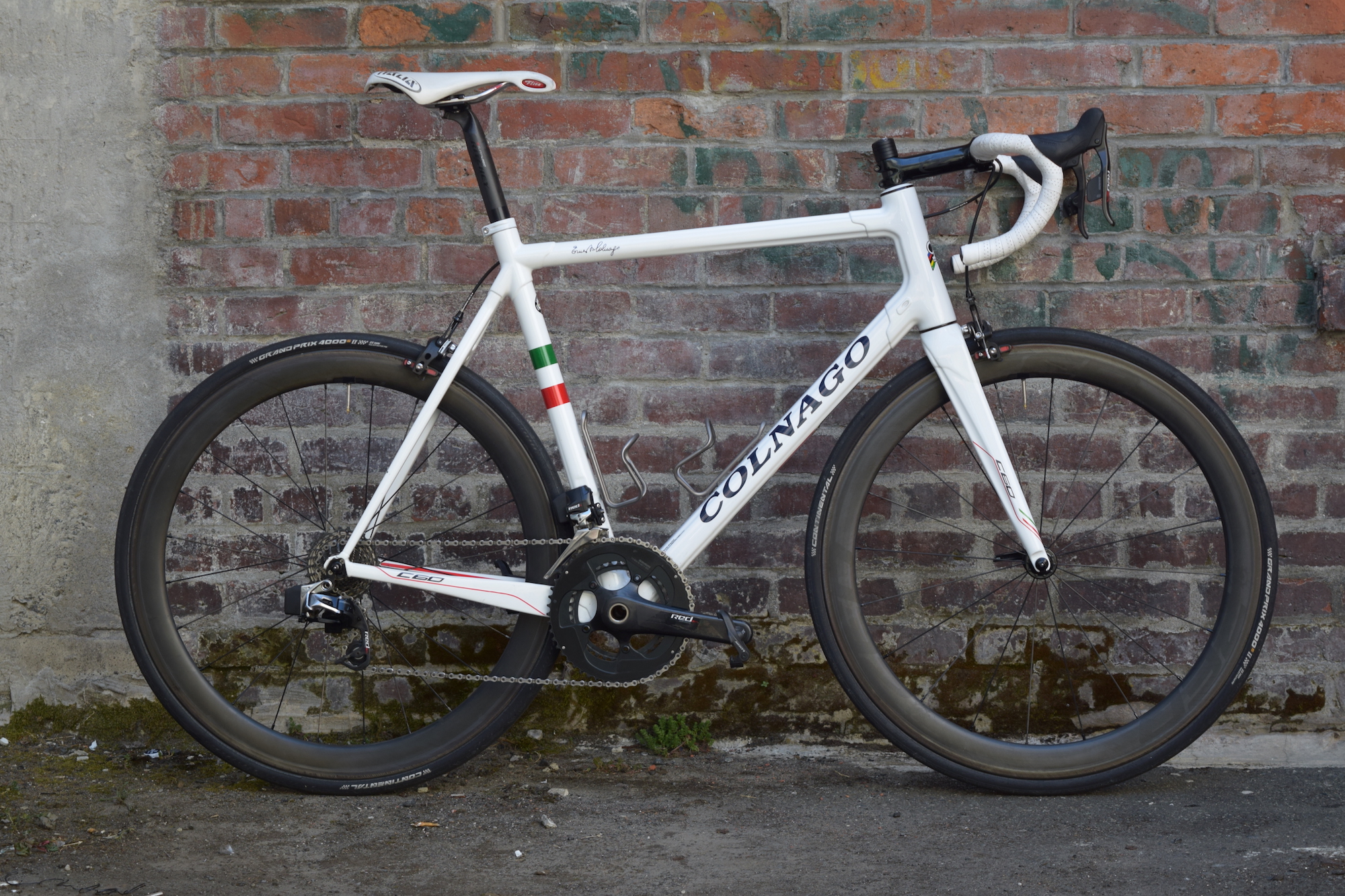 Colnago’s C60 traces it’s lineage over 20 years back to the revolutionary C40, which dominated Paris-Roubaix for nearly half a decade after its introduction. Like the C40, C50 and C59, the C60 follows the convention of naming Master series ‘C’ frames after the number of years Ernesto Colnago began making frames under his own name. Like all C series frames, the C60 is made entirely in Italy, from tube and lug production, to assembling and even painting the frame. Producing the C60 so close to Colnago’s Cambiago home allows them to offer a staggering 14 sizes, plus a custom sizing option, and 11 different paint schemes.

The C60’s distinctive tube-and-lug construction is a nod to the traditional ways of making frames, clearly, but it is also Ernesto’s insistence that those traditions are relevant in the era of high-tech super-light science bikes. While it is undeniably visually stunning, this is far from a showroom bike. Colnago claims the oversized star-shaped tubes are more than a throwback to the C40, but significantly improve stiffness over the C60’s predecessor, the C59. The C60 also features Colnago’s ThreadFit82.5 bottom bracket, employing screw-in allow cups to house a range of possible press-fit BB’s. This may seem like an odd detail to hone in on, but creating a system that ensures your frame will accommodate different BB standards and run quiet well into the future is a strong indication that Colnago expects riders to enjoy their C60’s for years to come. A testament to their faith in their own craftsmanship, and a welcome change from the typical disposable ‘latest-and-greatest’ fashion that currently dominates the cycling industry. 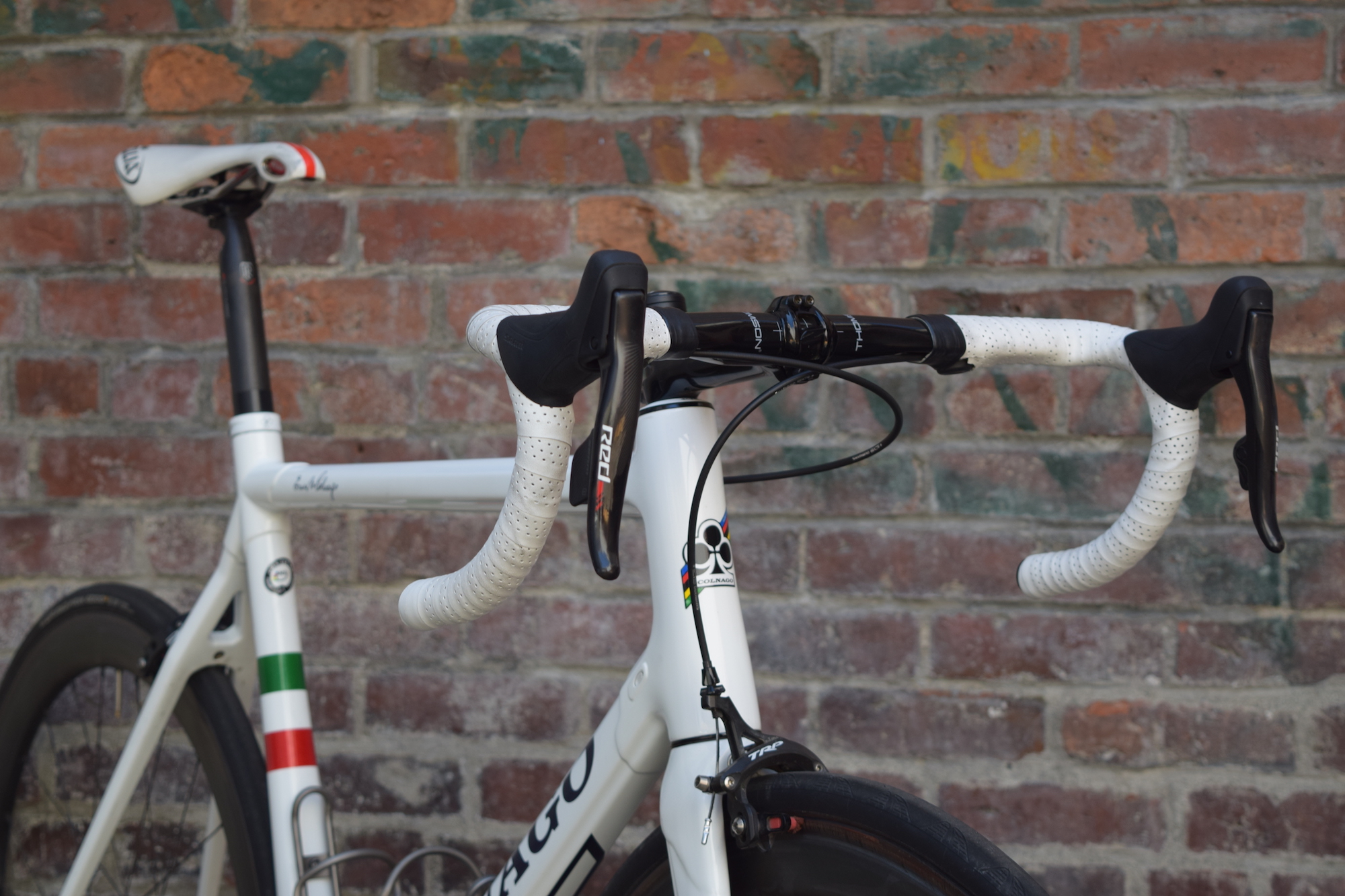 Ty’s built up his C60 around an array of quality parts you’d expect to see on a bike of this pedigree: Thompson bars on a Zipp Service Course SL stem, Moots Ti cages, and Zed Wheelworks built carbon hoops spinning on super-light Tune hubs. The most notable addition, though, is SRAM’s newly introduced wireless Red eTap groupset. In addition to ditching the clutter of wires, Red eTap is a bit aesthetic step forward for the American manufacturer. Their Red eTap not only looks at home on the Colnago, but makes adds to the clean look of this already very, very tidy bike. While convention/pretention is usually to spec Italian parts on Italian frames, SRAM’s new offering is actually a surprisingly good complement to Colnago’s own marriage of high-tech materials with traditional lug-and-tube frame building techniques. It’s a novel way to merge the craftsmanship of a storied builder, that elusive ride ‘feel,’ with the most modern materials and parts available. Still, we wish SRAM had called their remote shift buttons something, anything other than ‘blips’ and ‘clics.’ 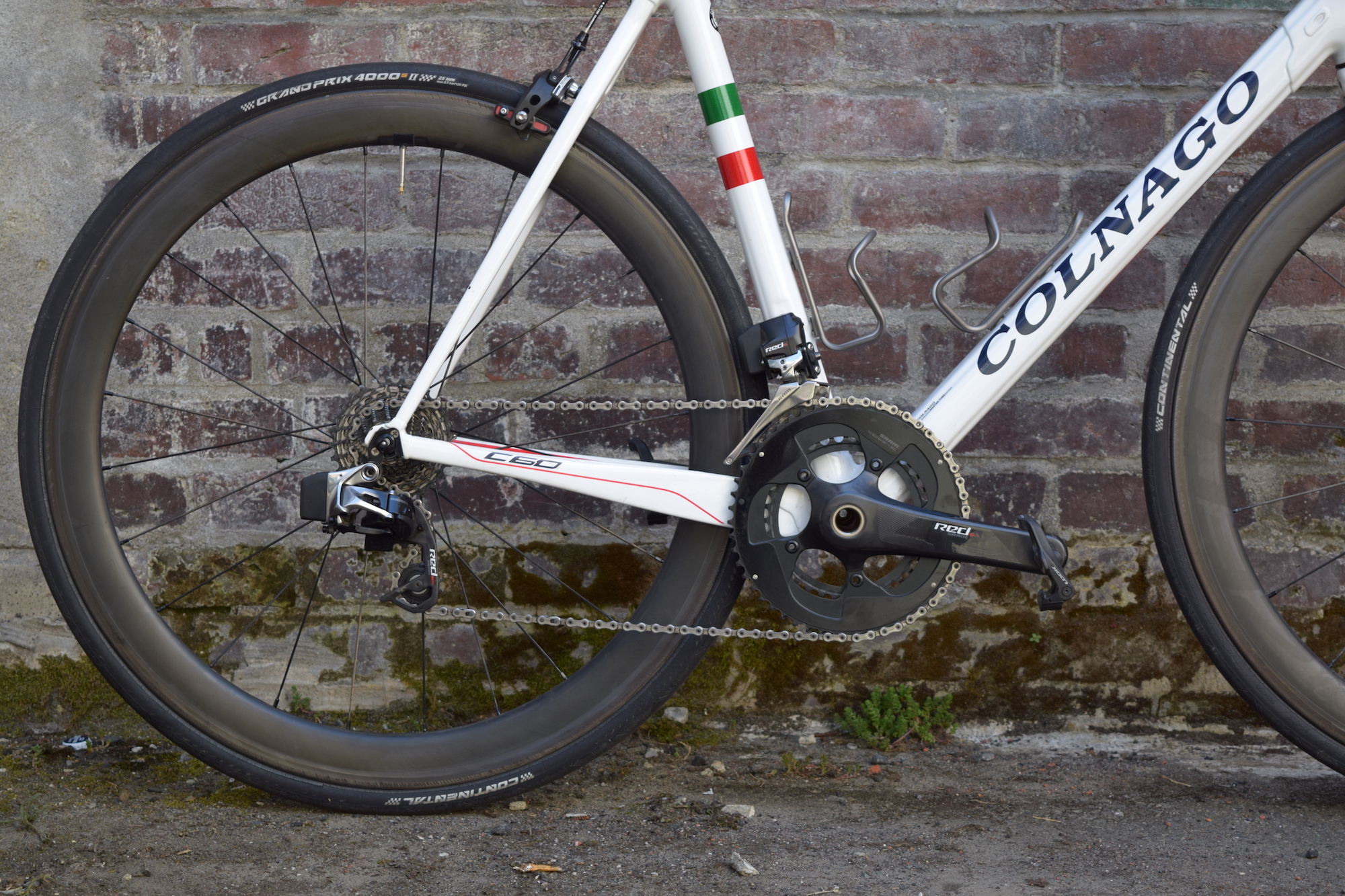 While Colnago gives us more than enough to love in the C60 alone, Ty has a personal connection to the bike as well. You can ask him for details on the story, but the impetus for this build was a tribute to his family, who arrived in Canada via New York, and their own Italian lineage.  So, when the latest bikes have faded into ‘last years model,’ we’re sure we’ll still see Ty on his C60, and we’re just as sure it’ll still be looking spectacular. Makes that replaceable BB shell sound like a better and better idea, eh? As always, click through the gallery below for all the details on Ty’s beautiful Colnago C60: