After several years absence, we’re reviving fixed gear criterium racing in Victoria! Last seen revolving around Phillips Brewery in the 2012 Design District Crit, this year we’re crashing the party at Robert Cameron Law Cycling Series Sunday finale: Cycling BC Provincial Crit Championships on the Legislature Crit course. Before the big event, we’re profiling some riders and bikes that’ll be on course Sunday. After talking to Clay and Aidan, Parker, Brad, and Gillian, it’s time to talk to the guy that keeps everything running smooth: Matt Mahoney 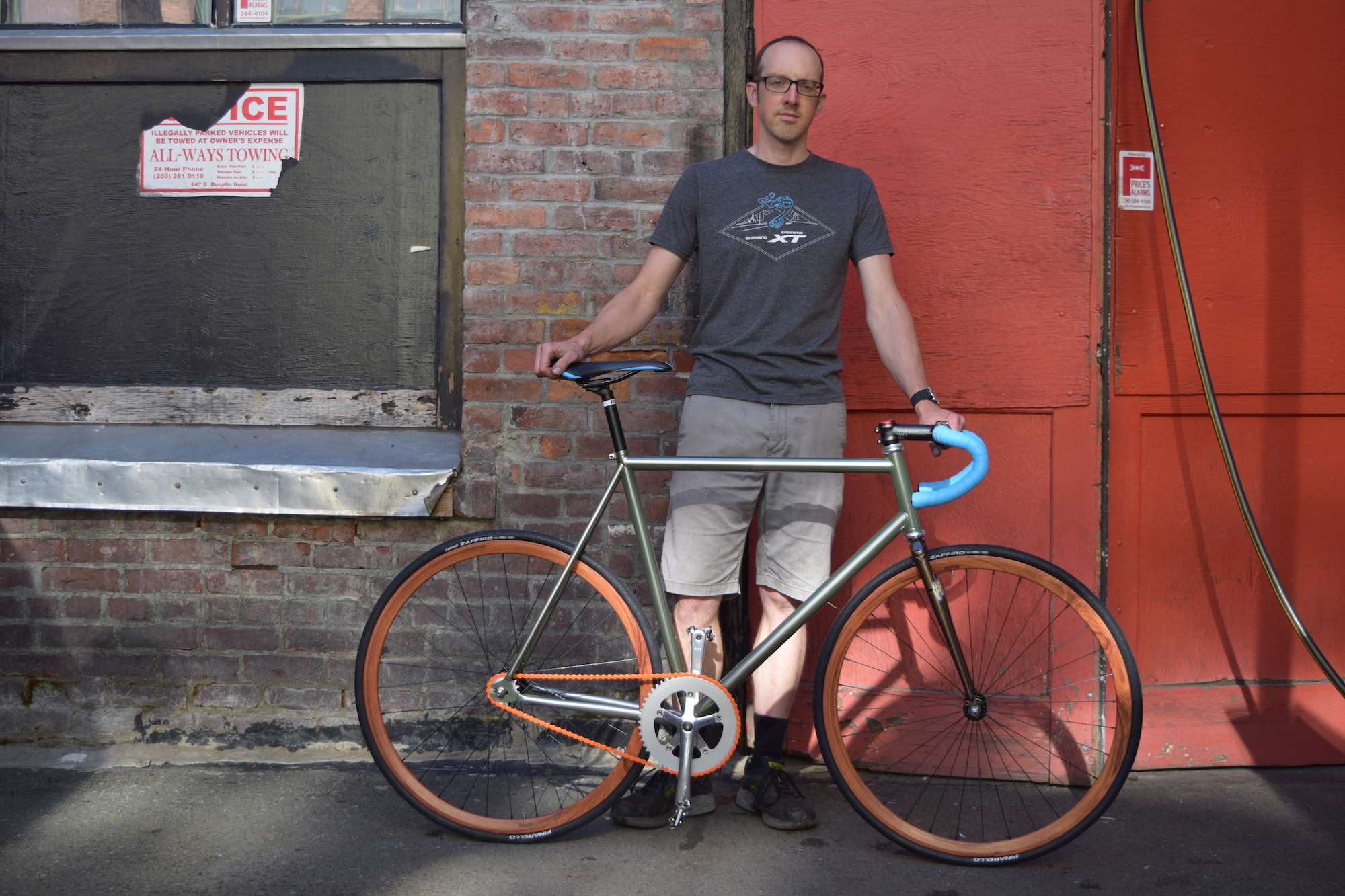 Ok, so ‘Portland’ isn’t the best nickname, and nobody ever calls Matt that. But it’s way better than ‘MERIKUH, which is the only other option I could come up with early this morning. Matt has direct access to the brake lines on my own bikes, so we’re going with the safer option. Plus Matt’s as far from the stereotype of Trump’s soon-to-be-great-again American as you can get. He’s so polite that, legend has it, people thought he was administering the permanent residence test, not taking it. Because we Canadian’s are all soooo goddamn polite, right? You’d never know Matt’s from Canada’s underwear, except he keeps talking about NPR, not CBC, and has all these stories from College bike racing, Gentle Lovers-era racing, and the early years of SSCXWC, way back int he B.I.G. era (Before Instagram. Portland riddle: If a bunch of singlespeeders rode around in a field and no one was there to ‘gram it, did it even happen?). But Matt wasn’t just at the early SSCXWC’s, Matt sewed the golden speedo. The superhuman dexterity and skilled handiwork that wrought such a splendid garment aren’t limited to shiny underpants. Matt is a mechanical wizard, skilled repairer of carbon (again, Portland. Devout orthodox followers of the Holy Trinity: Reduce, Recycle, and the oft forgotten Reuse), and even builds his own frames. We stopped Matt from fixing your urgent bike repair so we could ask him the following, very important questions:

Matt Mahoney: This is based on the cheapest parts we had laying around the shop that we’ll never sell. That turned out to be 52x16t.

MM: Podcasts only. On the Media or The Ralph Nader Radio Hour.

MM: If possible, I’ll clad myself in wood. 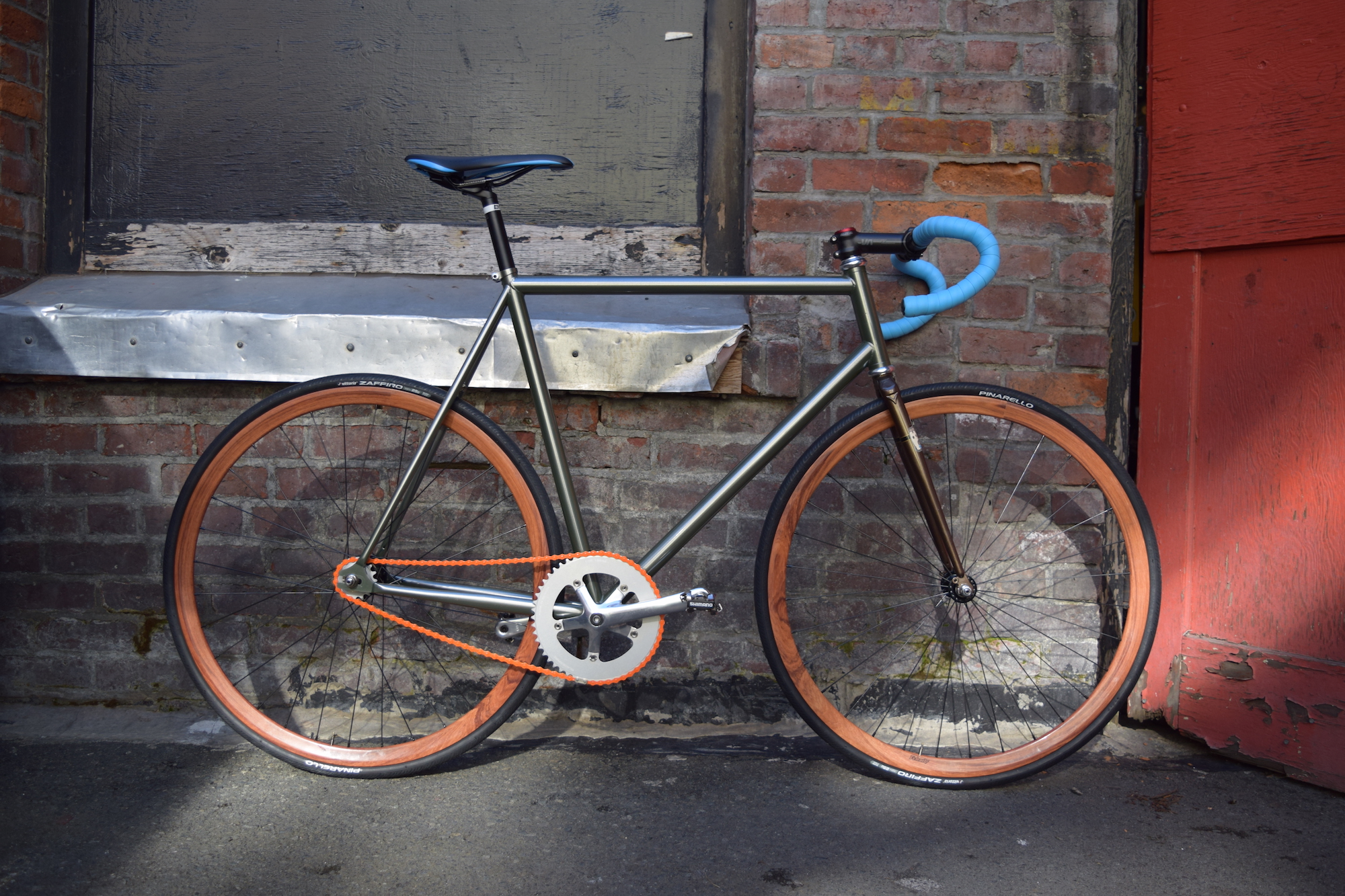 On Sunday, Matt will be racing this exquisite, if hastily assembled track bike. Rising from a pile of random parts lying around Broad Streets expansive basement space like a phoenix from the ashes of the bikes that have come before, and bikes that never were, this bike is purpose build for Sunday’s Fixed Crit. While the salvaged ex-Kona fork is great, the real gem of the build is clearly those locally sourced, west coast cedar grain Velocity Deep V rims. Remember when we all really, really wanted Velocity Deep V’s? Well Matt’s keeping the dream alive. And he’s added that stunning Cheeto orange KMC chain, which doesn’t clash with the wood grain at all. Up front, there’s the previously mentioned Kona fork, an adjustable angle stem, and that sky blue foam bar tape reminding Matt that, even with a bike made of basement parts, the sky’s the limit! 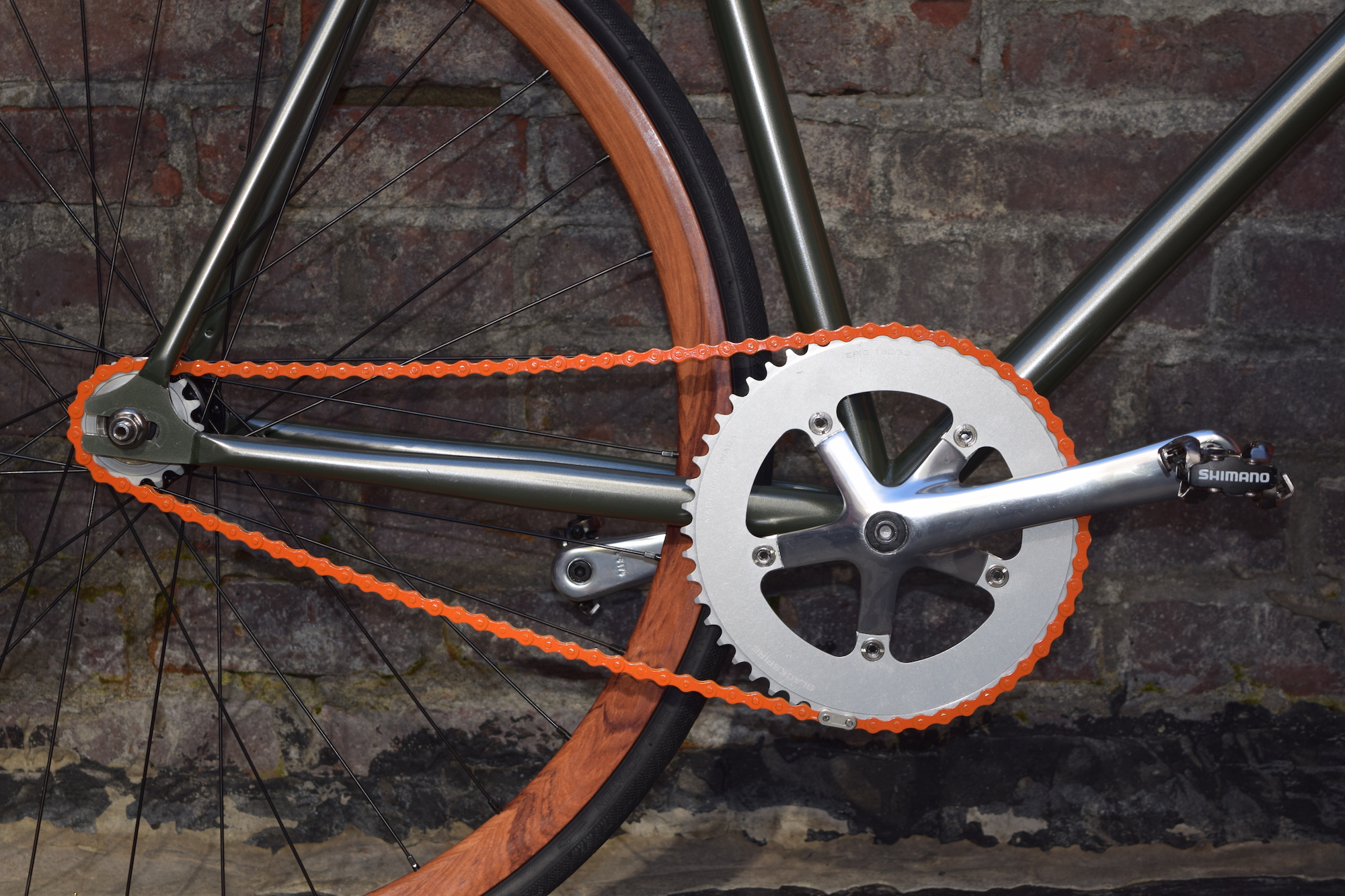 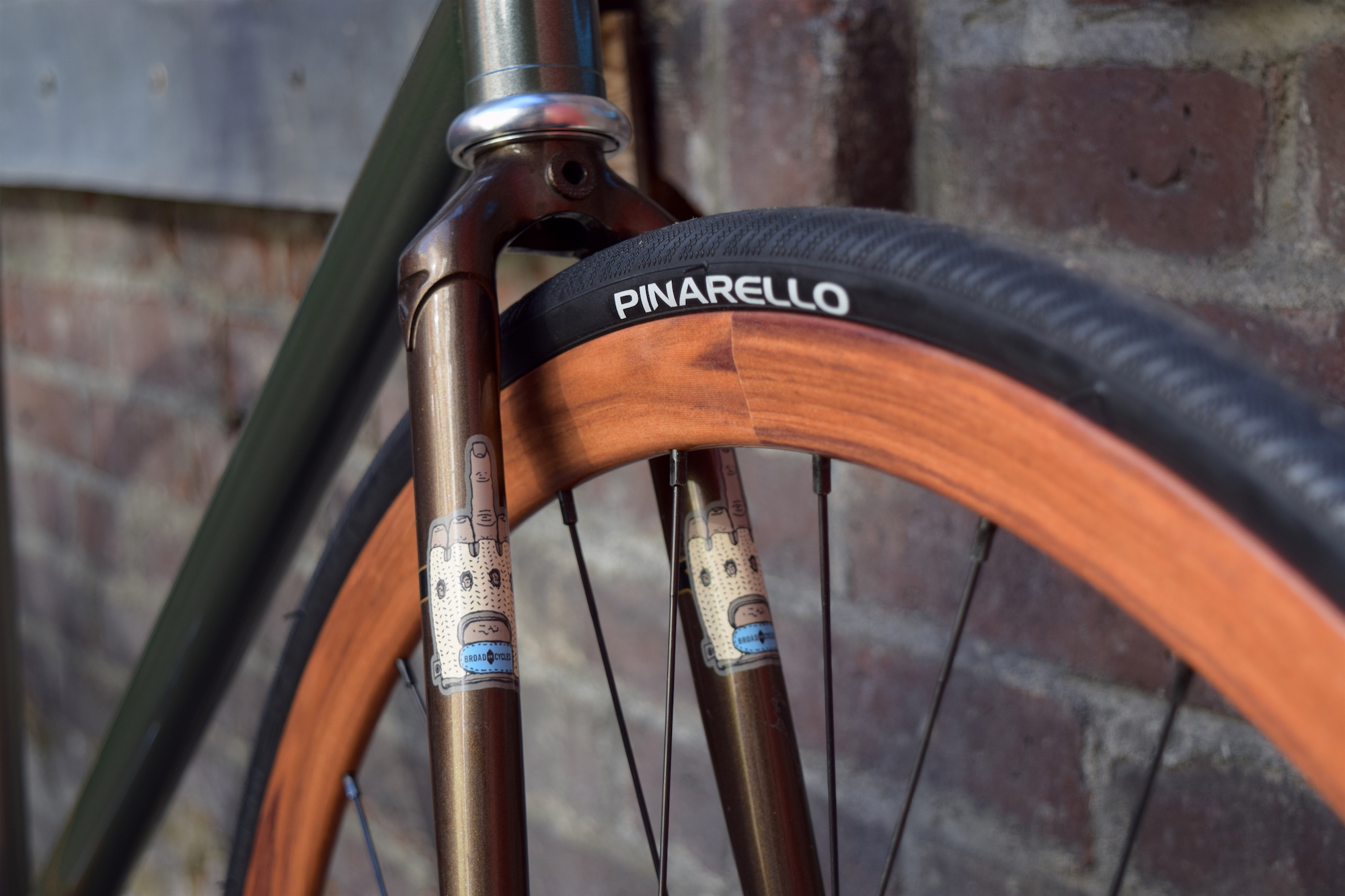 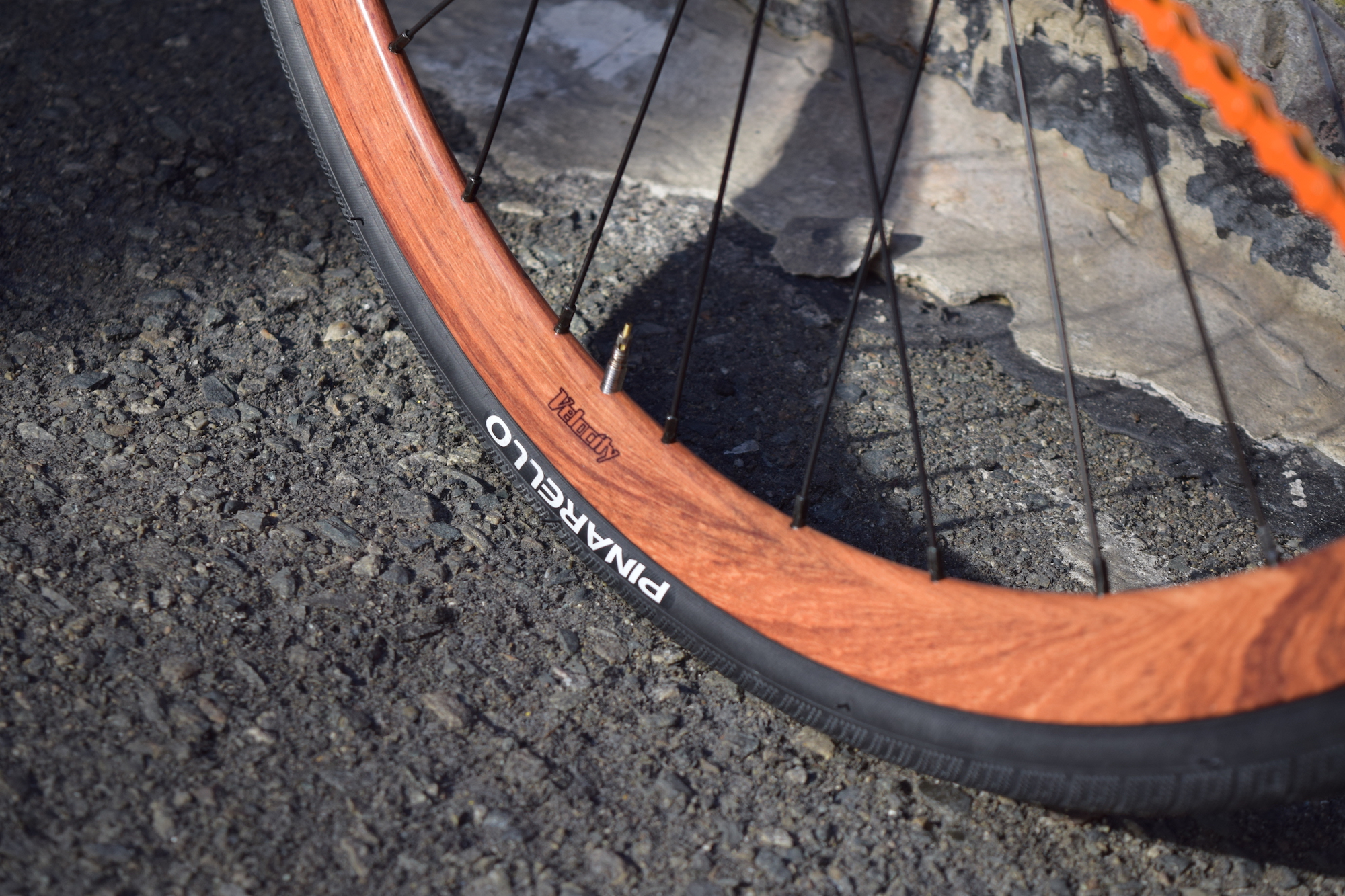 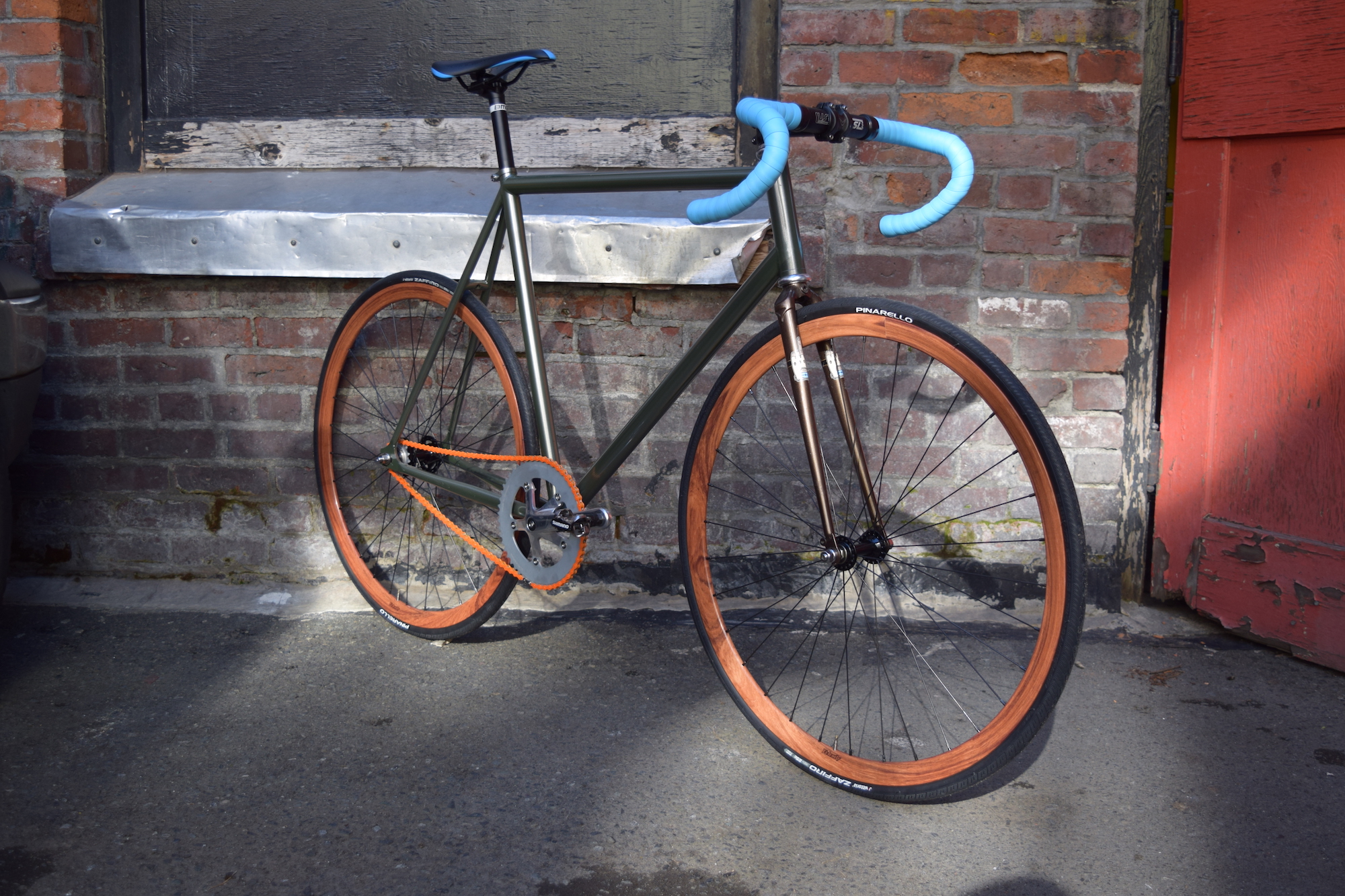