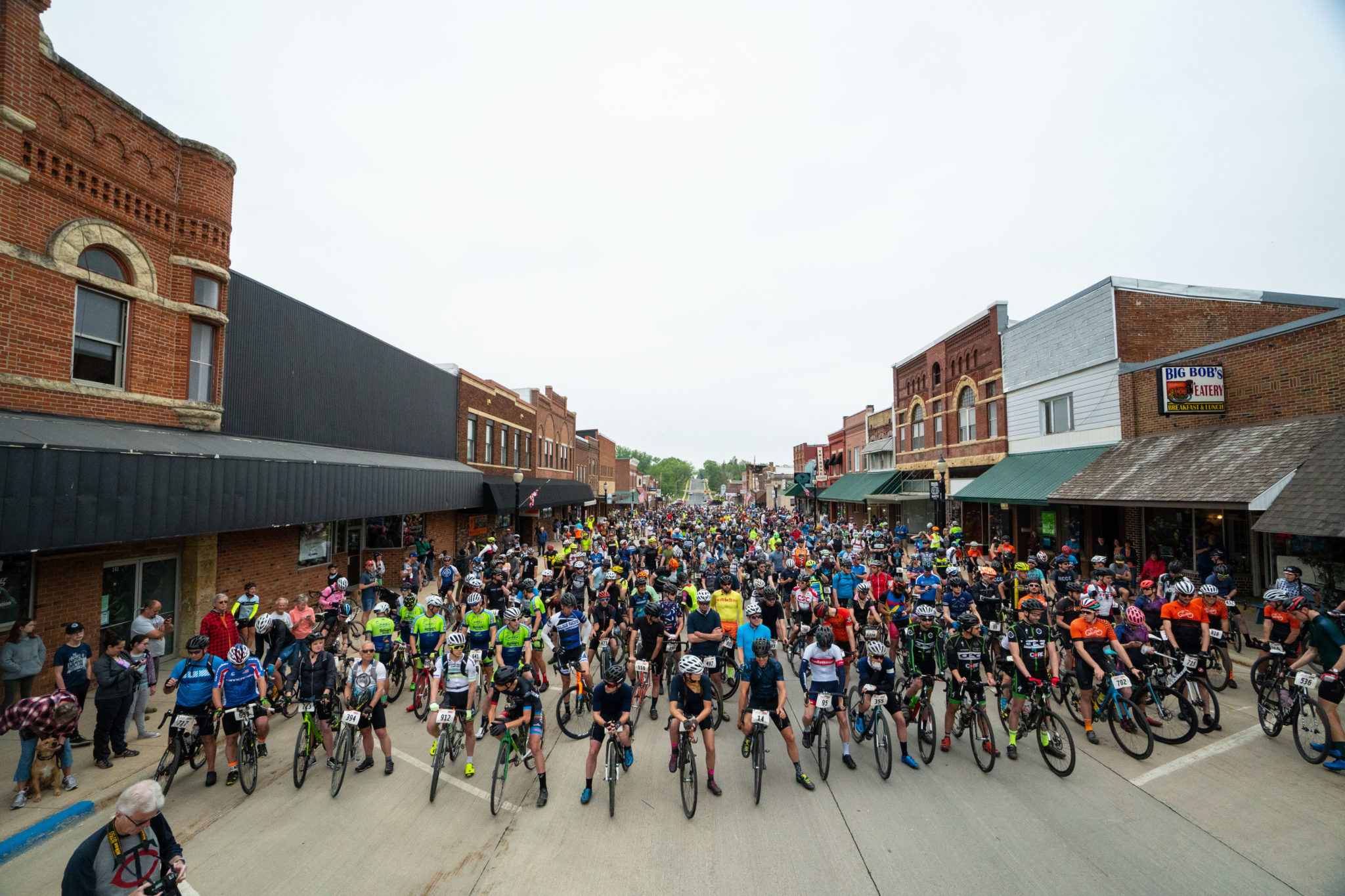 Add another tally to my listing of improbable spots I’ve been to for bike racing.

This weekend pastime– of packing up a bag to bursting with spandex, shoes and a helmet and departing for somewhere strange to line up and race my bike– continues to surprise me. I’ve raced in freezing rain, and under Las Vegas lights, had snow build up on my bars, and have been cradled between craggy Rockies. But this trip to Minnesota was a first.

More pro-life billboards than pro-cycling, the tiny town of Spring Valley is an improbable spot to travel to for a bike race. Charmingly desolate, it’s got one main drag and lots of friendly folks mowing lawns in front of low brick homes. The ubiquitous Star-Spangled flutters from stoops, welcoming every year a field of close to a thousand to the start of the Almanzo 100, a one hundred mile gravel race in the heart of the midwest.

To add to the incongruity, Shimano– monolith and Japanese master of cycling  manufacturing– chose this event to unveil their new gravel-ready Ultegra RX derailleur to a slew of journalists and cycling media. In support, the folks at Shimano flew in a load of engineers, product managers and staff from as far away as the Netherlands, Japan, and Southern California, as well as a stack of human guinea pigs to line up and ride 163kms on rolling gravel roads.

Lucky enough to count myself in the ranks of guinea pig, I had a pocket crammed with energy gels, and my Focus Mares outfitted with Shimano’s newest clutch-based “road” derailleur. While our gang of eighteen or so gravel ambassadors represented a diverse cross-section of intent for the event, my own ambitions tilted towards a fast finish, and racing this thing as hard as possible.

And what a race. I’ve never been in a frantic, high speed start like that. Pieces of gravel pinging from beneath tires, off downtubes and sunglasses, like riding through a sleet storm of tiny stinging rocks.

Five and a half hours of flat, fast gravel roads, punctuated by precipitous drops into lush river valleys. Then back up steep climbs, only to slow to a crawl in the headwinds that scour the farm roads of Southern Minnesota.

In the end, it was the final two steep climbs that let me unhitch myself from the small group of chasers, and ride solo (Headwind! Cramping legs!) in pursuit of the rider who launched a decisive attack two hours earlier. Second place, and a burning body concluded my Almanzo.

Sitting under the shade of some trees at the finish, nursing a beer and aching limbs, it was a pleasure to see racers roll into the finish. Riders way down in the ranking, still sprinting one another for the line, trading war stories, hugging, high-fiving.

What a scene we’ve created, what a subculture I have found. It’s been a pleasure to travel weekend after weekend and find these moments of camaraderie, competition, and social cohesion in bike races the world over. Minnesota is another check on that list of strange spots that bikes have brought me to, and I am grateful.