Track bikes are usually simple machines: two wheels, one gear, not much else. But with Brad’s Felt TK1, there’s all sorts of action happening. Every part on the abbreviated spec sheet has been pushed to it’s limit. Felt is known for their work with carbon fiber frames, and the aero shaped tubes on the TK1 already cut a striking figure. Add to that a Stages equipped Shimano Dura-Ace drive train, eye catching track disc and 5-spoke wheels from PRO, and 3T’s track sprint bars and Brad’s TK1 looks full on, even standing still. It’s no surprise that this is the bike that carried Brad onto the podium in the 2014 BC Cup Premier Track Series. 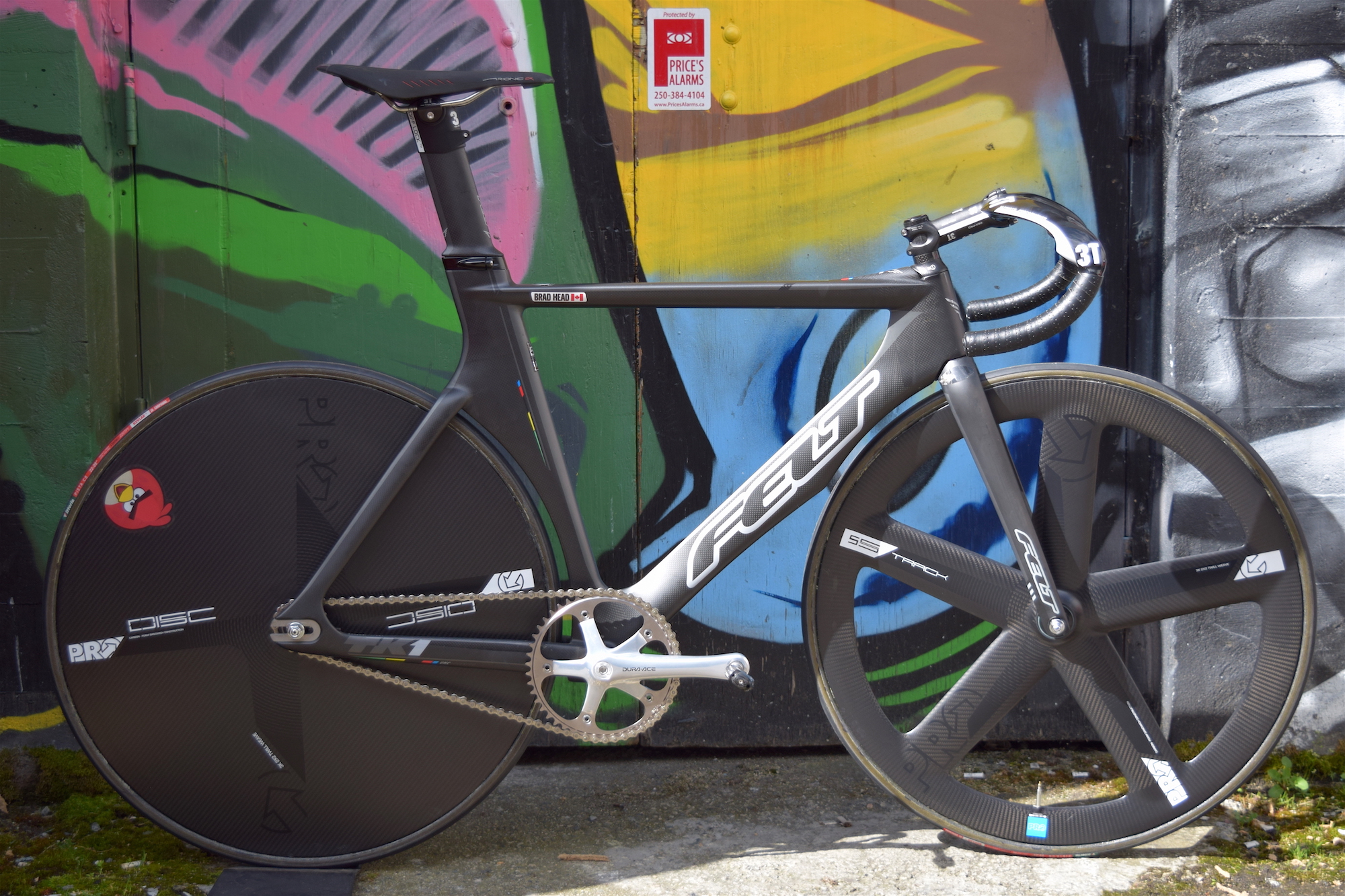 The TK1 is based around Felt’s Aero Track frame and built from their UHC Advanced carbon. Even the horizontal dropouts are titanium surfaces in place of the usual steel. Felt’s Aero Track fork gets their UHC Ultimate carbon, all the way down to the carbon dropouts. On both frame and fork, the broad, aero shaped tubing all but disappears when viewed from the front.

While we’re on the topic of shapely aero carbon, how about those wheels? Both are PRO components, a Shimano offshoot brand. PRO’s disc tubular rim is made of 2×2 3k Twill weave carbon, and is track specific. While it’s 5-spoke count is the most metal of all spoke counts (Penta-spoke!), PRO’s 5S track tubular front gets the same carbon layup, only with added aero shaping to each spoke. Brad’s a numbers guy, so here’s the math: Aero carbon + Penta-spoke = speed metal. (Ok, maybe there’s a bit of alchemy in with our arithmetic) As for actual metal, both front and rear are rolling on ‘smoother than Kerry Ray Kings shaved head’ Dura-Ace 7600 Track hubs from Shimano. Add some glue and a pair of Vittoria Pista CS cotton tubulars and you have your self a set of race wheels!

And then there’s the drive train. Like the hubs hiding within PRO’s carbon, Brad’s TK1 runs on Shimano Dura-Ace. There’s a couple twists though. Shimano’s compatriots and track stalwarts, Izumi, kick in an Izumi Pro track chain. And, tucked away on the left crank arm, is a Stages power meter. One gear, and all the data Brad could possibly want.

Rounding out Brad’s TK1 build is an array of top drawer parts from Italian brand, 3T. The unique profile of 3T’s Scatto LTD carbon sprint bar is held in place by a 3t stem complete with Ti bolts. 3T also provides the hardware to go with a Felt TK1 aero carbon seatpost. 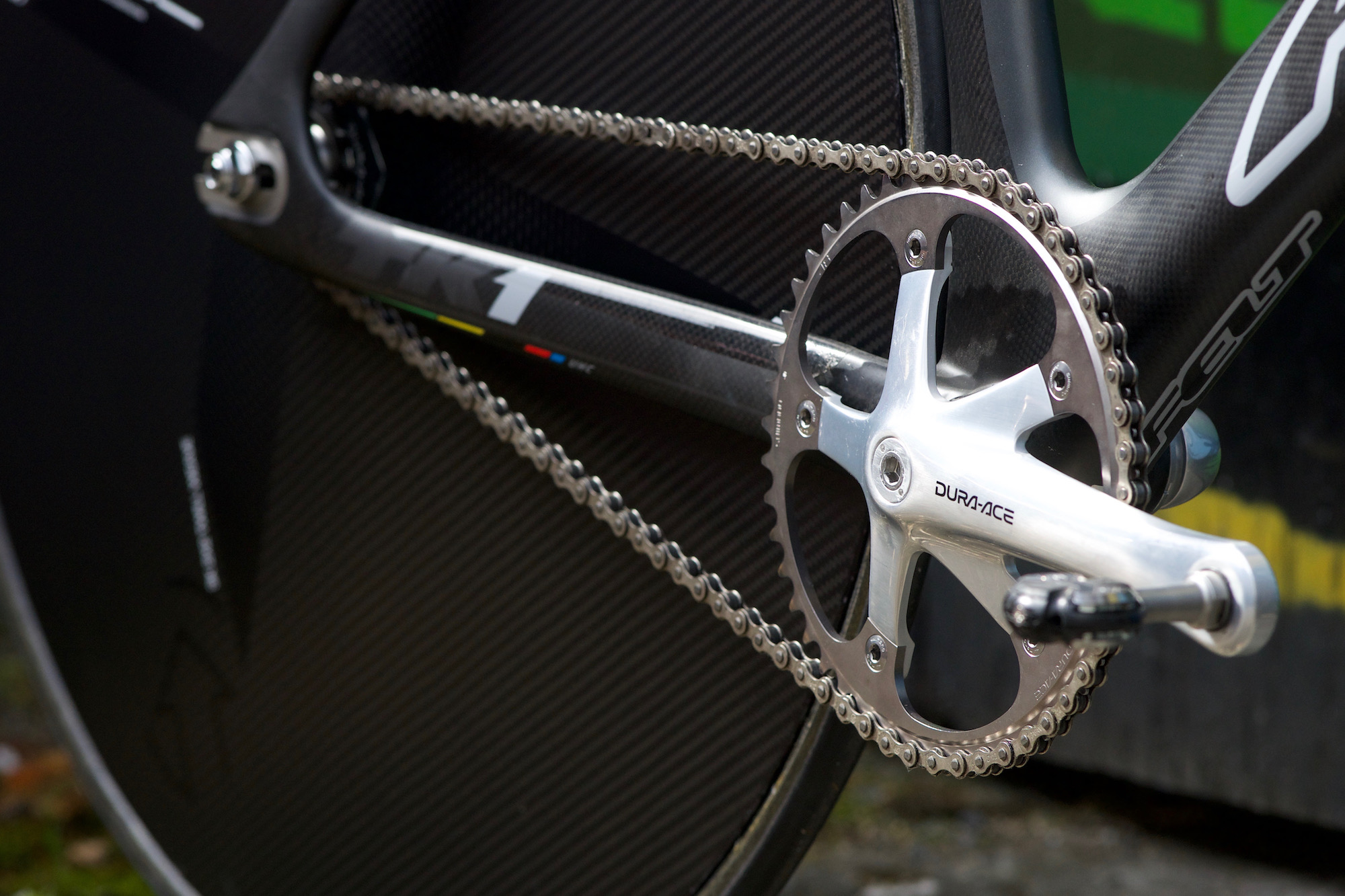 Click through the gallery below for a closer look: