When Bianchi introduced their latest in their Oltre series, the storied Italian brand jumped straight from XR2 up to the new top of the line Oltre XR4, adding in the slightly lower tiered XR3 at the same time. Not the boldest of statements, as P.R. moves go, but it does give some indication that Bianchi intended the XR4 to more than an incremental improvement on the already well received XR2 model. And when a brand with the sort of history Bianchi has makes any sort of statement, it’s probably worth taking note of. Ty’s Oltre XR4 build is itself quite noteworthy, featuring the forefront of American bicycle technology from SRAM, with their wireless Red eTap system, and ENVE, with their wide footprint carbon hoops. Assembled together, this wireless XR4 makes for one very sharp, top drawer race machine. 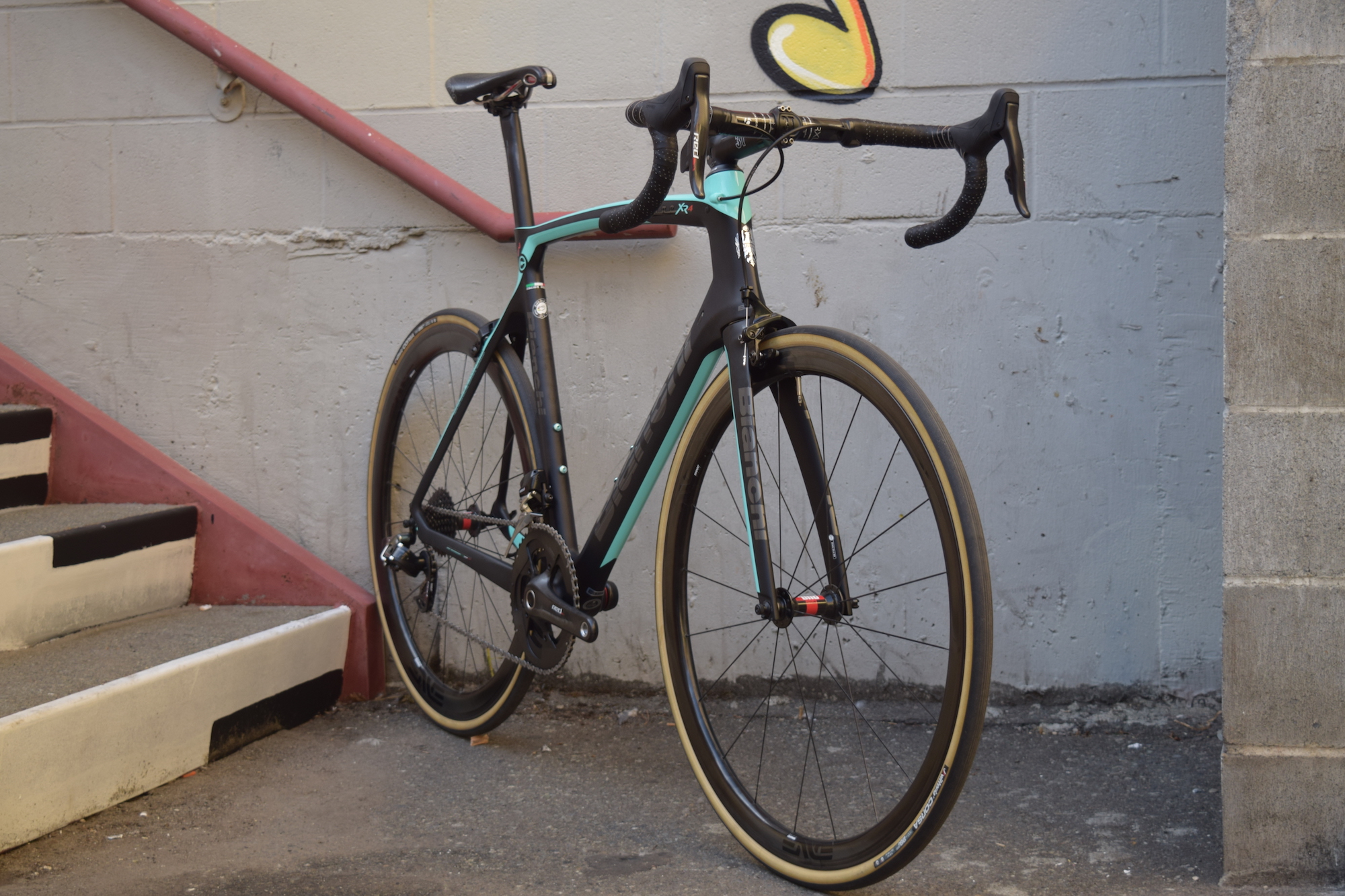 Much of what makes this Oltre XR4 build so very sharp is hiding below the surface, in the latest innovation from the long standing Italian brand. And by long standing, we mean that Bianchi, as F.I.V. Edoaro Bianchi S.p.A is commonly known, is the worlds longest running bicycle manufacturer still in existence.[1]  Other innovations pioneered by the Italian brand include the use of equal-sized wheels and pneumatic rubber tires.[citation needed]  Schools back in session so we thought we’d get all academic on you, and nothings more academic than faking it with Wikipedia citations. Especially vague, unverified Wikipedia citations. But hey – who knew? At 125+ years running, Bianchi’s place as longest running manufacturer is well established. But equal-sized wheels?! Pneumatic rubber tires?! That stuff is revolutionary. They could have just done that, signed their name in the history books (maybe by officially notifying the humans at Wikipedia), and put their feet up for a rest. Lucky for us, they’re not resting on their laurels. Bianchi’s still busy innovating, trying different things that no one else has. Except NASA, of course. And, for their latest cycling innovation Bianchi’s borrowing directly from America’s space people with their Countervail vibration dampening system. Countervail is a relatively science-y material injected into the frame of the XR4, the fourth frame in the Bianchi lineup to be made space-ready. Since Wikipedia might not cut it here, we’ll Bianchi describe Countervail themselves: 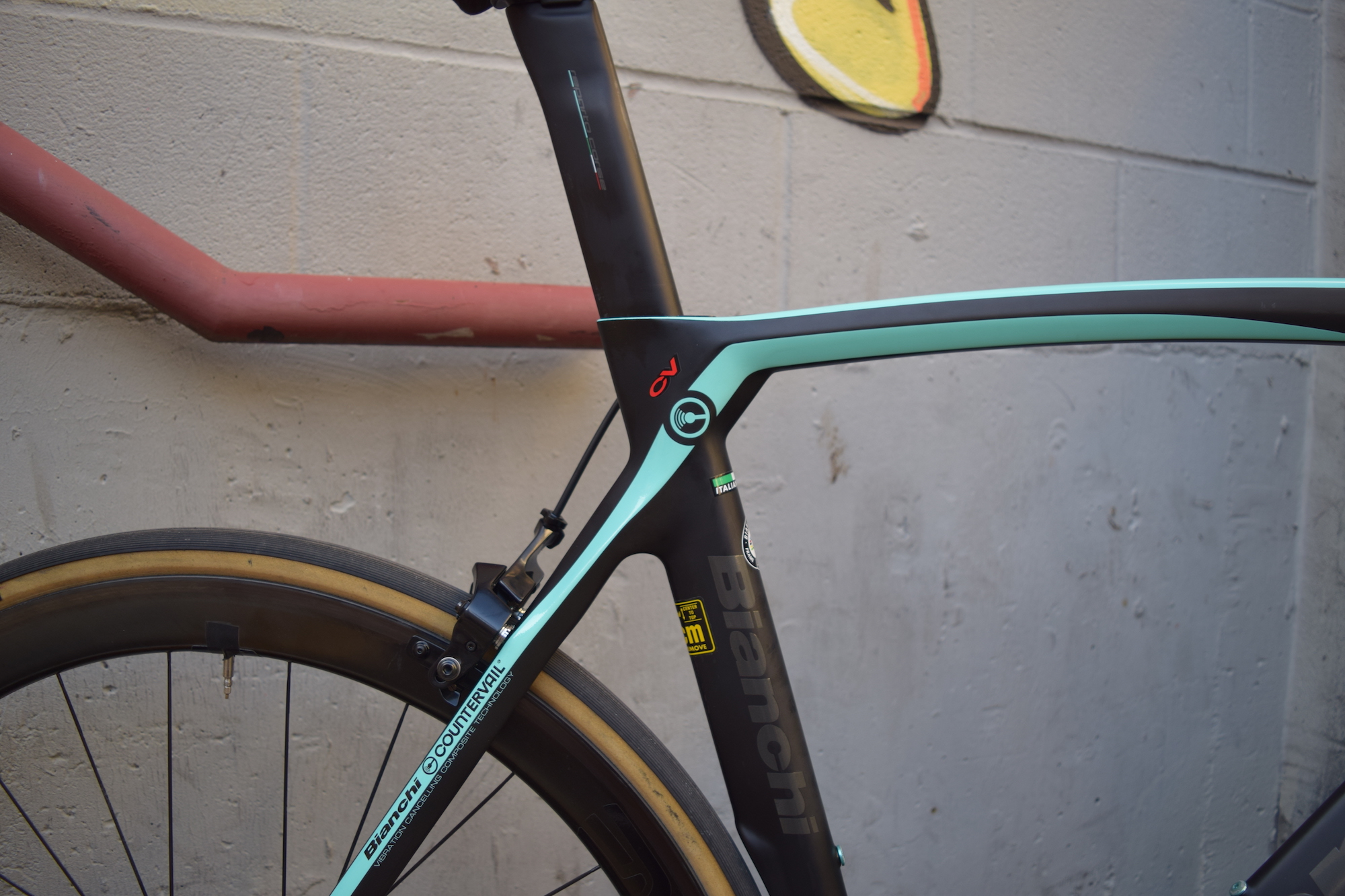 “Bianchi collaborated with Materials Sciences Corporations to develop our innovative and exclusive use of MSC’s patented Countervail® integrated vibration cancelling system for cycling. Countervail® is a patented viscoelastic carbon material with a unique fiber architecture that cancels up to 80% of vibrations while increasing the stiffness and strength of our carbon frames and forks.”

What this means on the bike is reduced road vibration, increased stability and better, more predictable handling in corners and over rough roads. The reduced road vibration is also said to reduce rider fatigue so, among other things, its easier to hold an aero position for longer. All of which makes you faster and, hey why not while we’re at it, more comfortable. Not a bad combo, and not what one would usually expect from the Sufferfest / marginal gains end of performance cycling. It’s an even more attractive package when you add in XR4’s notable stiffness, aero tube shaping, and a weight that easily brushes up against UCI’s oh-so-arbitrary limit. 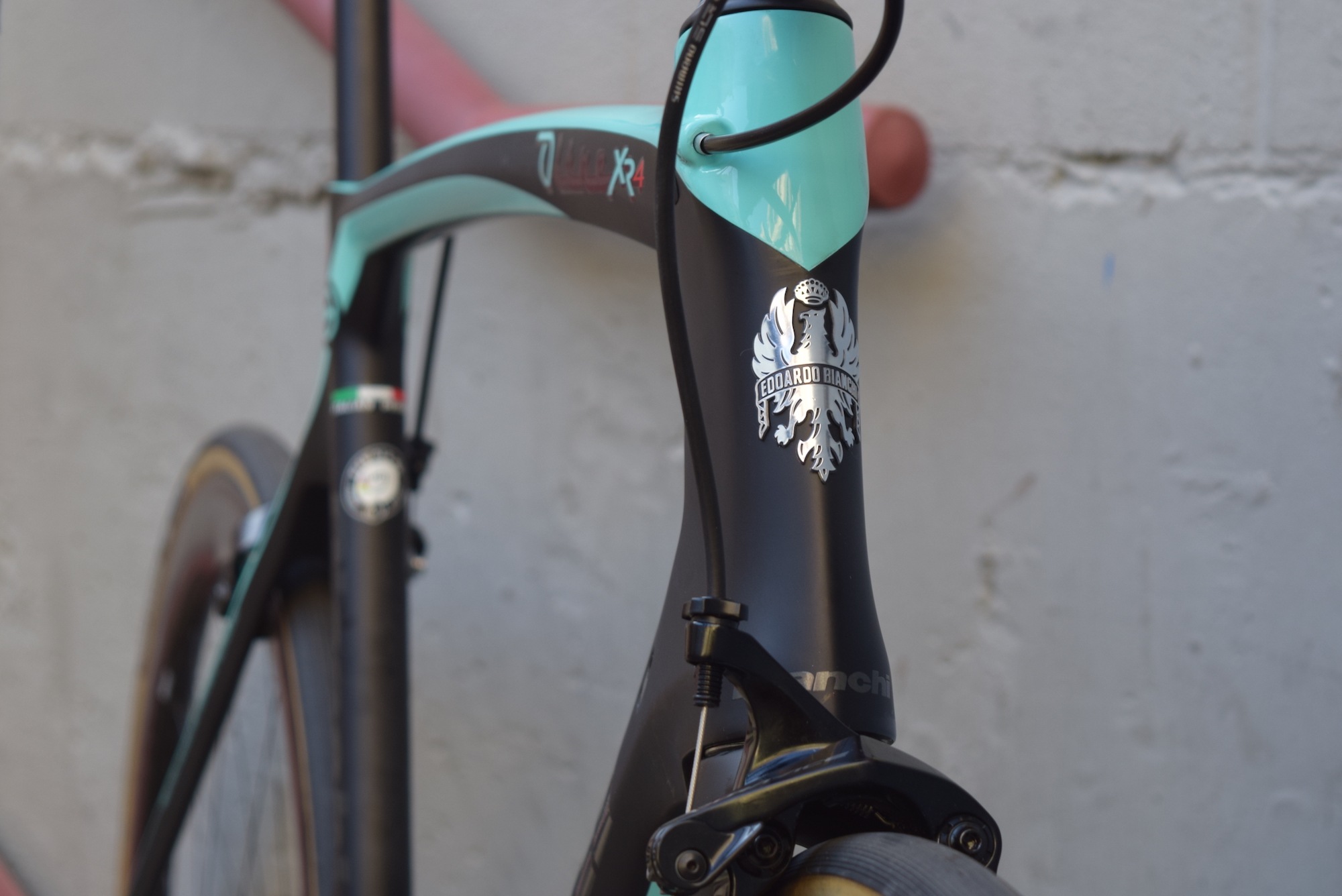 While it may be the Countervail space material inside the XR4 that makes this rocketship truly space-aged, Bianchi’s also employed a number of more terrestrial tech improvements to solidify it’s top-tier position in Bianchi’s lineup. To improve the bikes aerodynamic profile, Bianchi borrowed the hourglass head tube shape from it’s Aquila CV time trial bike. Also carried over from the Aquila are the XR4’s bowed fork legs, a shape they claim reduces turbulence from air flowing between the fork and front wheel. Finally, the Oltre XR4 frame is built around direct mount braking system, which they say significantly improves braking performance. 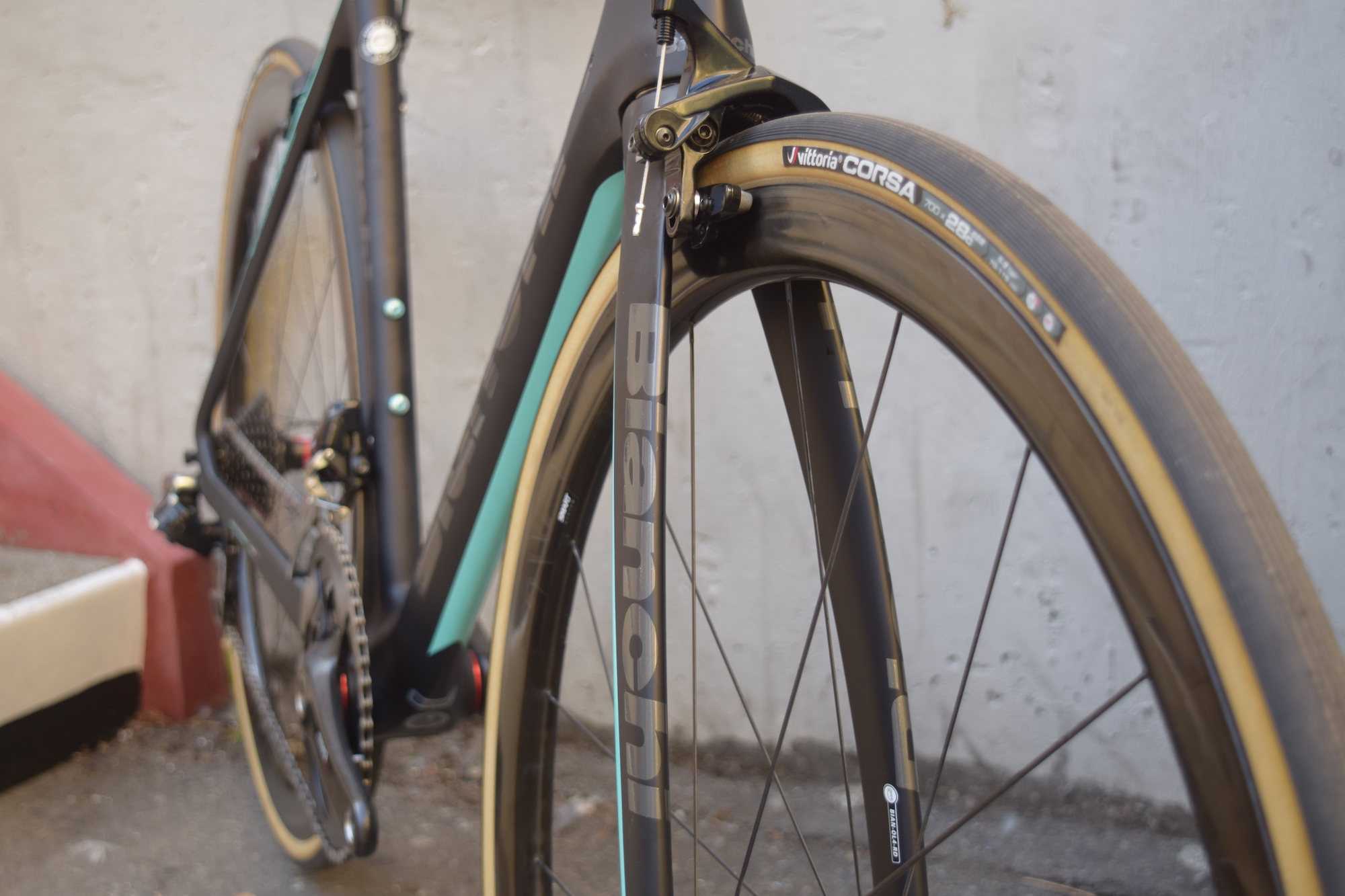 So, to sum things up, Bianchi’s Oltre XR4 is quite aero, it is light, it is filled with science stuff to make it ride and feel better, and it has equal sized wheels. But wait! There’s more. It, quite obviously, is a bit of a looker, too. That a top shelf Italian race bike should be rather sharp aesthetically should go without saying. In reality, few and far between are frames that look good for lanky fellers, especially in the burgeoning realm of aero offerings. Generally, any person of considerable height – by cycling standards, anyone over 5’2 or so, and especially anyone gasp over 6′ – should try stick to straight tubes and ‘classic’ geometry. There’s a good number of very pricey aero frames that look … just absolutely terrible in any of the ‘outlying’ sizes. Thankfully, Bianchi’s been thorough enough to consider all sizes, not just frames between the 52cm & 54cm ‘ideal’ cyclist. With Bianchi’s long history of sponsoring professional teams, we’re really not sure where they found these test models for sizing the XR4, but the effort clearly shows and, as a fellow lanky human, I’m quite glad they did. I bet Ty is, too. 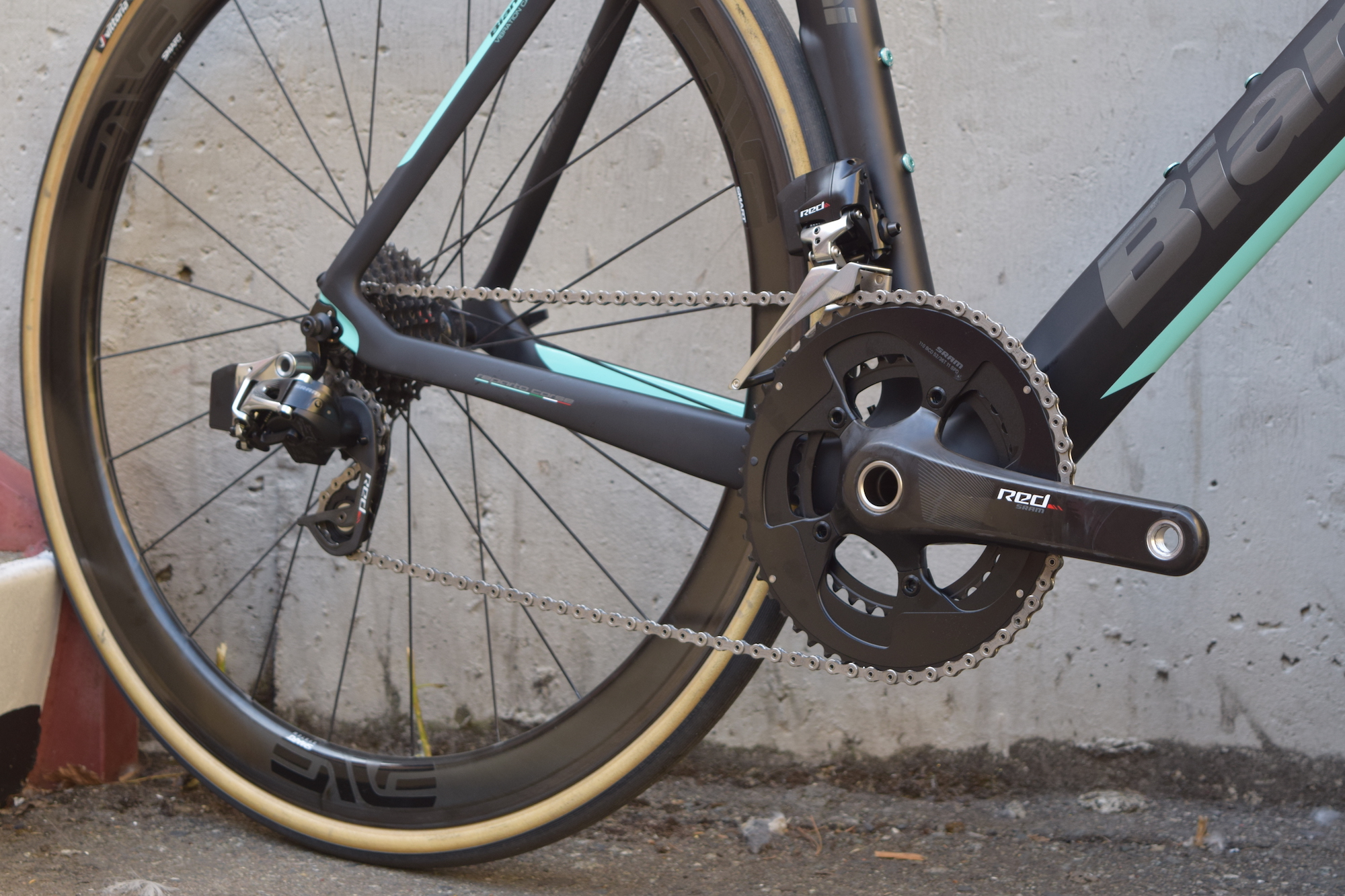 As mentioned, Ty’s running SRAM Red eTap, and a set of ENVE 3.4SES hoops, and Shimano Dura-Ace direct mount brakes for a build that lives up to the XR4’s style and bleeding edge engineering 1-2 punch. It may not be the newest thing on the block any more, but SRAM Red eTap’s full wireless system is still quite the technical marvel to see on a bike. There’s just something about wireless shifting that really gets at that obsessive urge lurking somewhere, deep inside every cyclist to purge all cables, even if they’re hydro or wires. Add in ENVE’s 3.4, with their beautiful looking, and sounding, machined carbon brake track and wide footprint, paired nicely with 28mm Vittoria Corsa rubber, and you have  a thoroughly modern race bike.