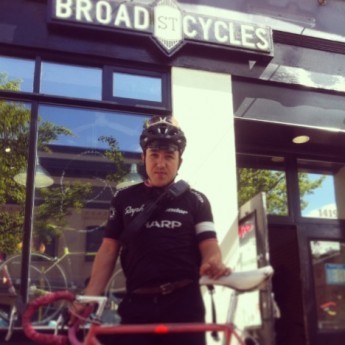 Steven Grandy is just one of the cast of characters hanging around Broad Street Cycles.

Working as a bike courier, and devoting his time to the pursuit of local road racing, Steven is one of Broad Street’s team riders.

We have been stoked to help Steve out this season with a lean/mean/dreamy Focus Cayo EVO, some racing gear, and the chance to continue mixing it up at an elite level.

Steve has put together the following race report from the Tsolum River Road Race that happened a few weeks back. Read through for some esoteric insight into regional road racing tactics.

Keep an eye on the BSC blog for more of these race reports as the season goes on, as well as a few rider profiles & equipment shakedowns. In the meantime, hop over to Stuckylife.com for a look at Steve’s race machine from last year, a Look 585. 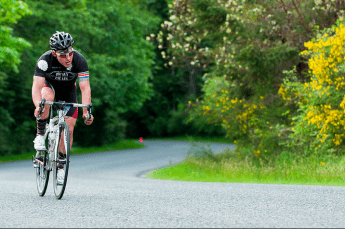 The up-island road races are often an overlooked opportunity to race on the island. As usual transportation was not much of an issue as there were a few groups attending.

The course profile was a (10km loop) x 8 with little elevation gain except a minor rise at the start/finish area. The race was largely represented by Oak Bay/Wheelers riders and a 5-7 rider junior development team (VIPRS).

On the first lap, a break was established with two riders from the Wheelers and later Alex Hui from Pro-city.  This quote from Tim Krabbe resonates with me. “Bicycle racing is a sport of patience. Racing is licking your opponent’s place clean before starting on your own.”  For the subsequent 4-5 laps there were various attempts to break away from unattached riders, attempts to close the gaps by the junior dev team and blocking by the Wheelers.   The Wheelers had Stephane Tran and Andrew Russell policing the pack.  This involved setting a reasonable tempo at the front which would discourage other riders to chase.  Ie at the front pulling at high 30s km/h to just above 40km/h.  A few of my attempts to establish a new break were countered by Russell or Alex Amiri.

My personal strategy was to avoid the front of the pack for the first 4-5 laps.  The rationale was as follows: The break would not last for 80km and the longer they were in no-mans land, the less effective they would be in final kilometers.  The riders involved in chasing would output comparable energy to the break and would also be depleted near the finish.  Also, the Wheelers at the front blocking, would be obliged to spend more time at the front.

The gap from the break extended to 2 minutes by the 4 or 5th lap. But, only two Wheeler riders remained in the break. A 120 second gap is about 1300m at 40km/h. 40k/h is approximately 11 m/s. In the remaining laps the gap was reduced to  about 45s. One advantage a small break has over a chasing peloton is that the turns between pulls are more organized, which in turn gives a better average speed. Also the chasing pack attacks itself which increases pauses in the tempo.
By almost the 2nd half of the final lap, the break was caught.  There were a few more break attempts and finally a small gap in the final 2km was formed with Alex Amiri and myself. (75m-100m) At this point we agreed to continue pushing the pace in hopes that the pack would fight for 3rd.  With about a kilometer to the pack came together and I was 4 or 5th wheel back from the front.  Nick Kupiack, took the front and attacked from 500m out. The riders on his wheel chased but couldn’t close the gap.  I managed 2nd by a bike length. 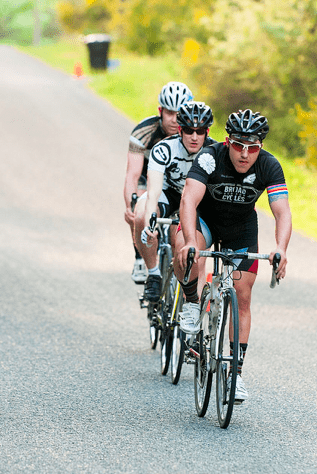