Here at Broad Street Cycles, we’re quite happy to be offering marquee Italian brand, Pinarello. A legendary name in the world of cycling, their bikes have been at the forefront of high end road bikes for decades. Parker, though, might be the most excited of any of us, as he’s spent the spring riding and racing a beautiful Pinarello Dogma F8. Until the surprise announcement of Pinarello’s Dogma F10 this spring, the F8 was Pinarello’s flagship ProTour level superbike. It’s carried Team SKY riders to multiple Tour de France victories, and countless other wins since it’s introduction and, despite being two F’s, or two dogma’s, short of the new F10, remains in the upper ranks of the suprbike category. True to the bike’s heritage, Parker’s built his Dogma F8 with a full compliment of Italian finery, featuring Capagnolo’s Record gruppo and Bora One 35 wheels. 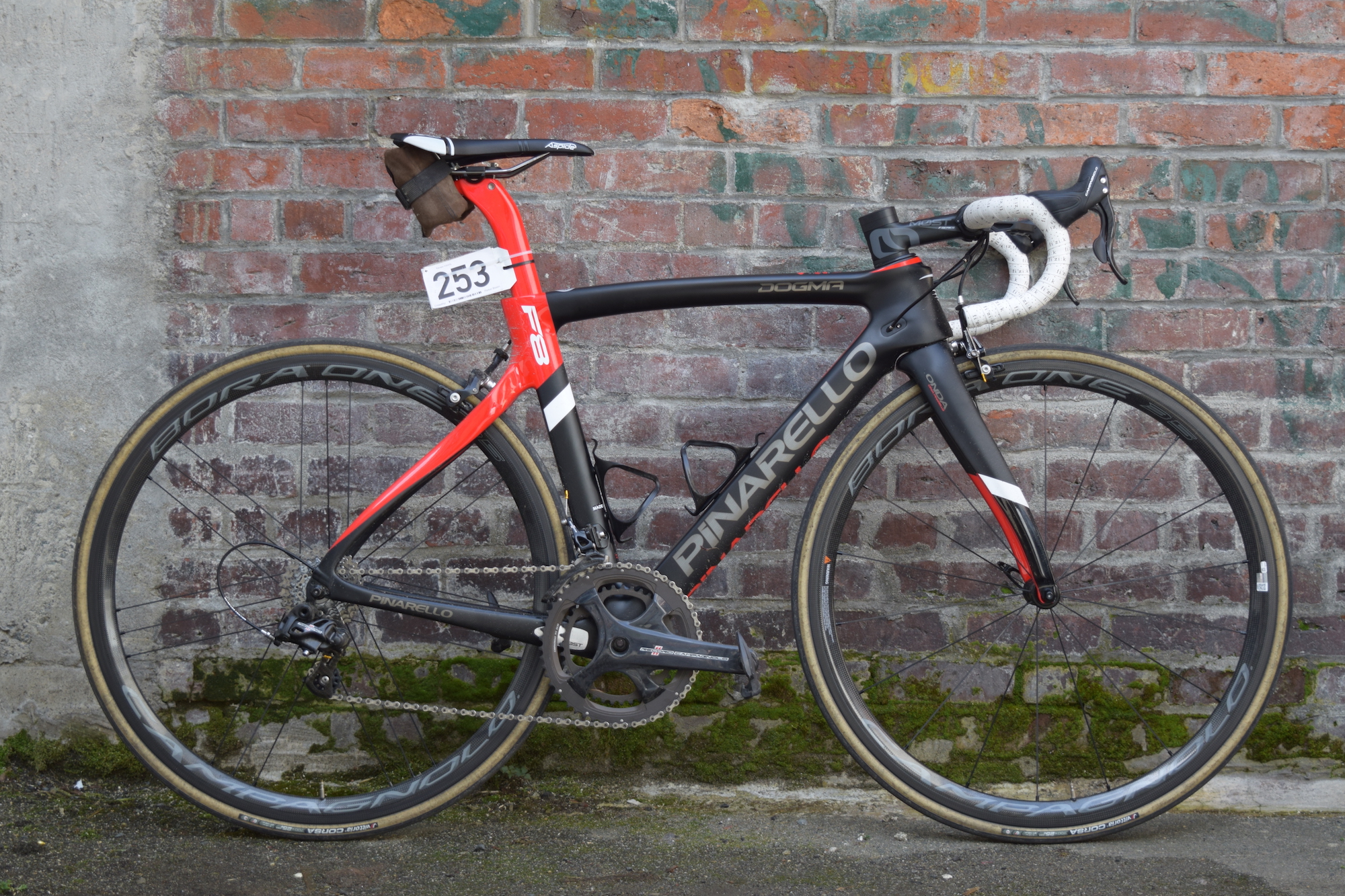 Developed through collaboration between Pinarello LAB, Team SKY and Jaguar, the Dogma F8 benefits from Pinarello’s reputation for legendary handling characteristics, but also from Jaguar’s experience with high tech aerodynamics. Unique tube shapes feature throughout the F8, combining Pinarello’s flare for design aesthetics with technical shaping, like in with the flatback shaping on the downtube, and extensive aero shaping at the head tube. While more conservative than past Dogma fork shapes, the distinctive Onda F8 fork is designed to separate the wheel and fork aerodynamics, placing the fork blades outside the turbulence coming off the front wheel. All of that science stuff only adds to Pinarello’s knack for working geo numbers to create that ineffable ride quality that only decades of experience can produce: Parker reports the Dogma F8’s killer handling immediately confers heightened levels of confidence on the bike. Oh, and it’s also really, really fun to ride. Fast and fun go together, it seems, and Parker and the Pinarello have been getting on quite well, consistently hitting EV Spring Series podiums through this cold, wintery spring. It’s a paring that just works, like Jane Fonda and 41st Century space exploration – thankfully Parker only had to travel to the 21st Century to form … Parkerello. 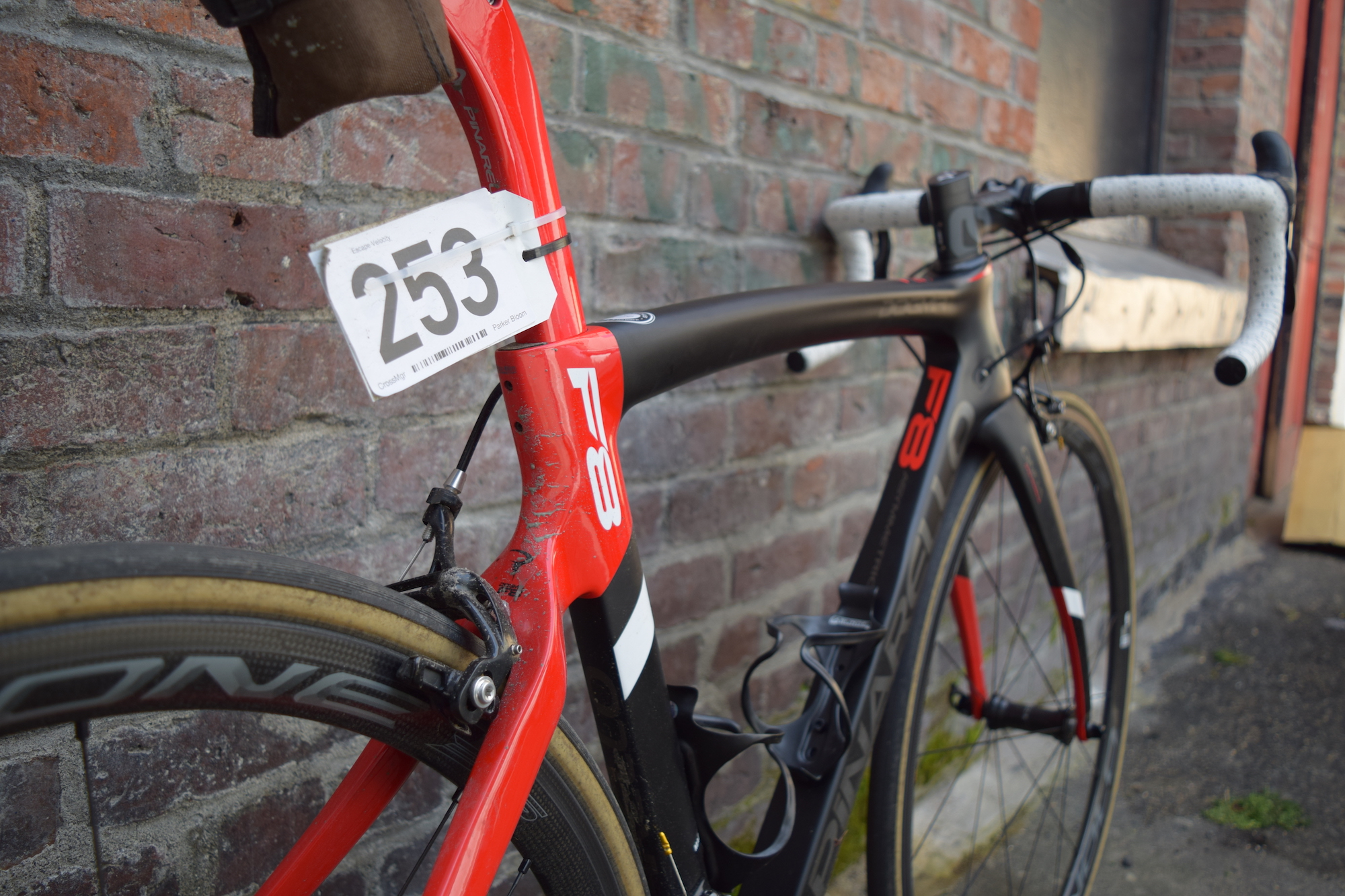 As is appropriate when building up a top shelf Italian race bike, Parker’s stayed on the Southern side of the Dolomites for the bulk of his Dogma F8 build. Not that ‘bulk’ is a word easily associated with Campagnolo’s feathery Bora One 35’s and carbon-centric Record 11-Speed gruppo. While they’re the lower priced option to Campy’s Ultra line, the Bora One’s still run on USB-model ceramic bearings. Radial lacing up front contrasts Campy’s signature G3 spoke patter out back: the distinctive 3 spoke groupings Capmy claims creates more balanced spoke-tension. Add Vittoria’s celebrated Corsa G+ rubber, who’s weather-worn sidewalls are a telling sign of just how harsh this spring has been on equipment, and you have a fully race-ready bike that would be confidence inspiring at just about any start line. Oh, plus some bottle cages from Texas based company, Arundel, who take bottle cages very seriously. If you were concerned, Arundel cages are ‘great in extreme situations’ but also ‘durable and elegant.’ All at only 28 grams each. Pure magic. They should even be enough to handle the demands of Stuckylife’s Annual Easter Gravel Grind this Sunday! 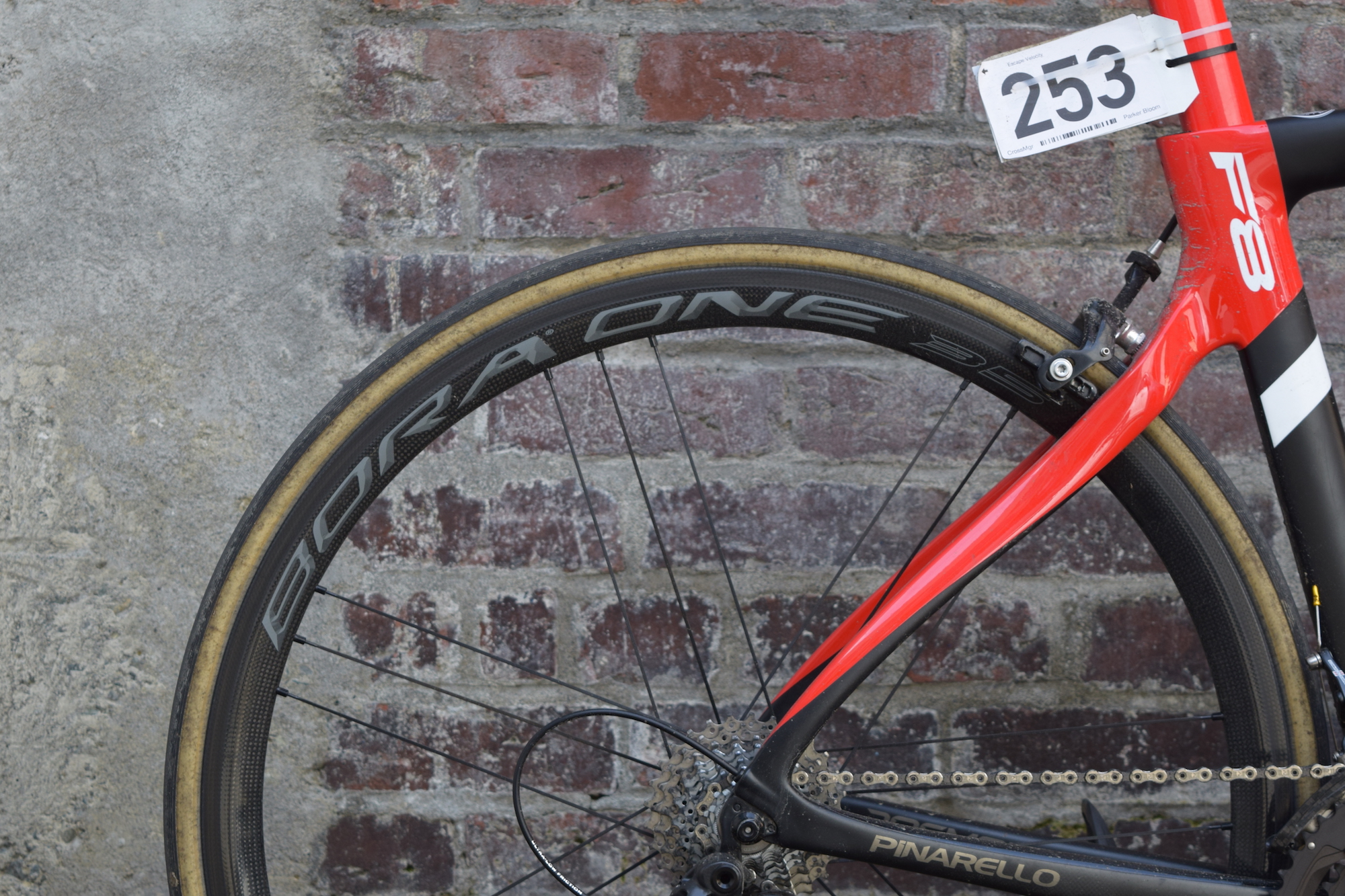 The devil’s always hiding in the details, and Pinarello’s Dogma F8 is full of clever tricks, so click through the gallery below for a closer look: