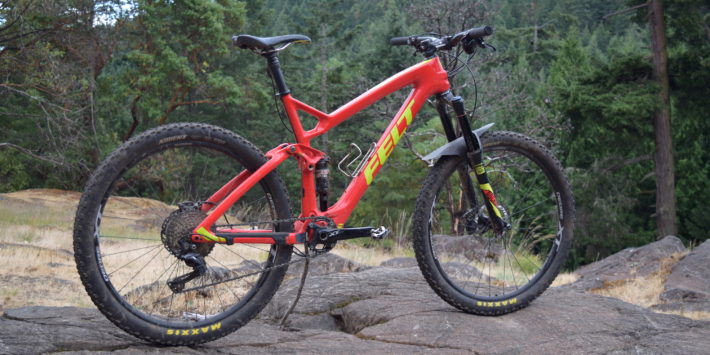 Felt has spent the last several years consistently working through and modernizing their mountain bike line. Last year we rode their their more XC oriented Edict and Nine bikes. We were really happy with both those bikes, so this year we thought we’d step it up a bit and dig into their revamped trail bike line. At the center of Felt’s leap back into bigger bikes is the Decree, with modern ‘short and slack’ geometry, 27.5 wheels, and a full carbon frame. Felt offers the Decree in a full spectrum of parts and frame builds, from their pure-bred Decree FRD to the carbon/aluminum frame budged Decree 30. We opted for the mid-range, attention grabbing Decree 3. 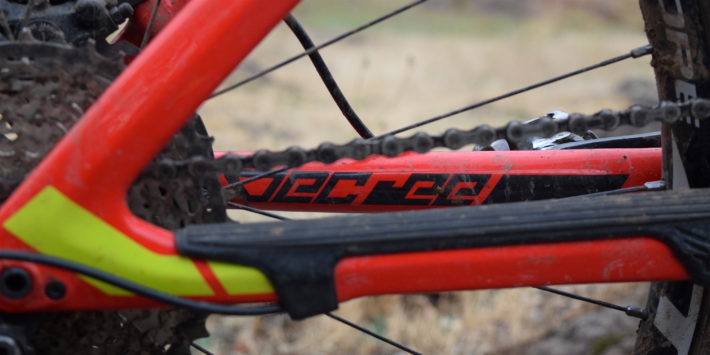 Yes, the frame is a very distinctive hue of dayglo orange. But that’s not the only reason the Decree 3 stands out. It’s surprising sub-30lbs weight is competitive not just with other similarly priced bikes, but with some of the thoroughbred trail bikes out here, and at a comparatively low sticker price. Part of this can be attributed to the F.A.S.T. suspension design, which employs flex-stay suspension to remove a pivot point from the rear triangle. But Felt also has a strong history, more widely recognized in their road and track bikes, of being at the leading edge of carbon frame technology. Even without Felt’s top-of-the-line FRD carbon layup, the Decree 3 clearly benefits from Felt’s extensive history producing carbon bikes. 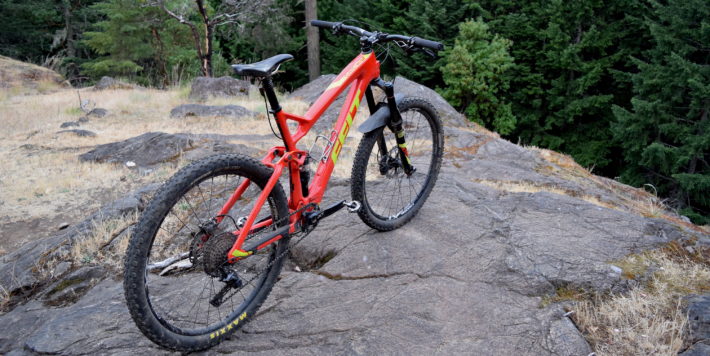 We get into more of the details below, but for a quick overview of the numbers Felt has set up the Decree 3 with 140mm rear wheel travel, paired with 150mm up front courtesy of RockShox venerable Pike RC Solo Air. ‘Modern’ trail geometry sees Felt bring the Decree in line with current trail bikes, featuring a longer reach, shorter chainstays, and a slack 66.5% head tube angle. Shimano XT runs via internal cable routing, with a KS Lev dropper post, with option for internal routing, keeps you prepared for when the trail gets steep. 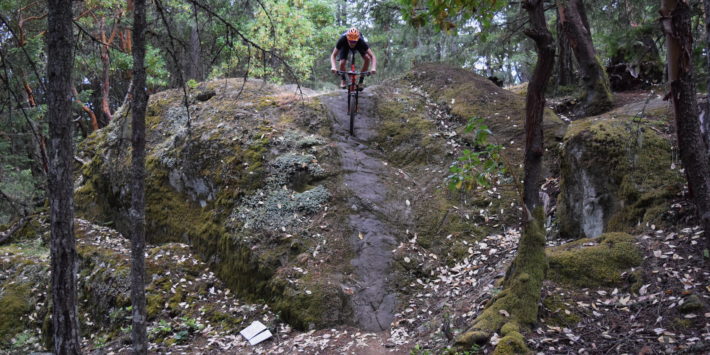 So how do the numbers feel on the trail? We sent Terry out to see what he could do to the Decree. After riding in Squamish, all around Vancouver Island, and even taking a swing at racing a couple enduro’s, here’s what he thinks of the bike:

Felt designed this bike around the descents, and the bike is hilariously fun to ride down hill. Headed the other direction, I was surprised how capable it was on the climbs – especially on some of Victoria’s more technical climbing trails.

Lets start with desert: this bike is really fun to ride! The short chainstay thing seems to have some benefits, as I was immediately carrying speed through tight, bumpy corners that I usually awkwardly struggle around. It’s light weight makes it extremely playful, getting airborne off any tiny trail feature. While it does fine at plowing through bigger features, the Decree really shines on trails that encourage you to have fun and get creative.

As for the climbing, I found the Decree 3 impressively nimble, even on Victoria’s often awkward, technical trails. It worked it’s way around tight switchbacks much easier than I’d expected from a 140/150mm travel bike, and would smooth out some of the more awkward, rocky trail features. This may be less of a concern somewhere where there’s consistent trail access via logging roads or smooth climbing trails, but riding around Vic, where any significant descending requires just as much technical climbing, not feeling like I was wrestling against the bike was really appreciated. And easily sub-30 lbs. weight doesn’t hurt either. 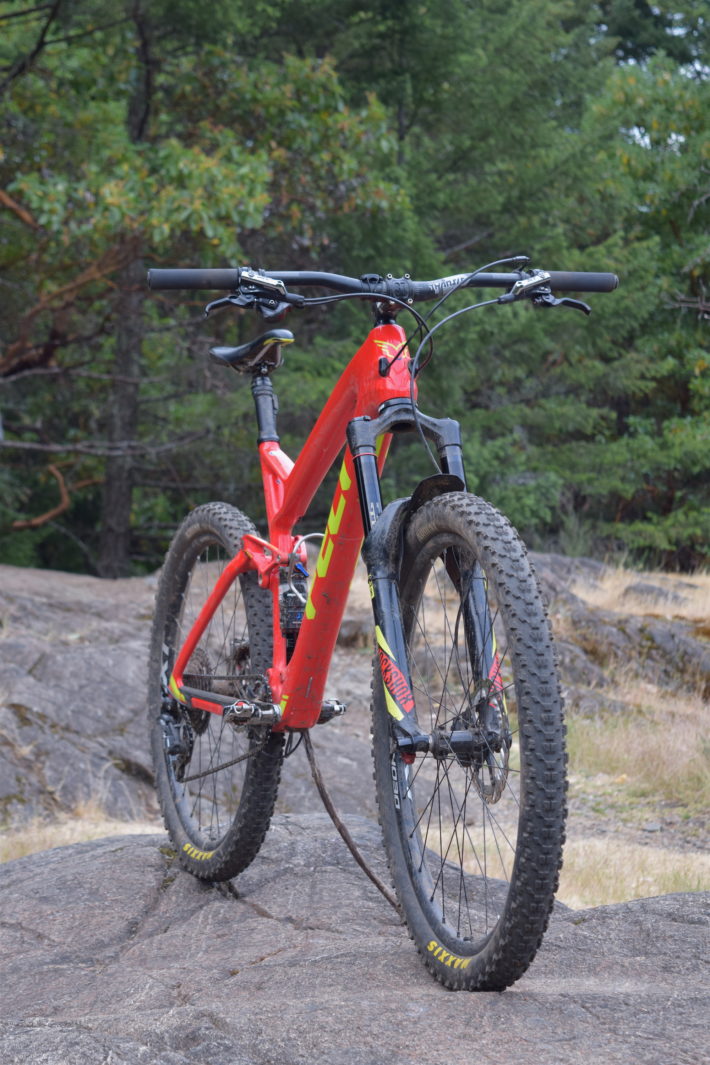 All the numbers, to the mm, and then some. For the people that read this far, and still need to know exactly what tenth of a degree the adjustable head tube angle is in the high BB position. So lets start with that. The adjustable chip in the rear suspension allows you do raise the bottom bracket up 10mm, and steepen the head angle to 67.3 degrees, for a more nimble steering feel. 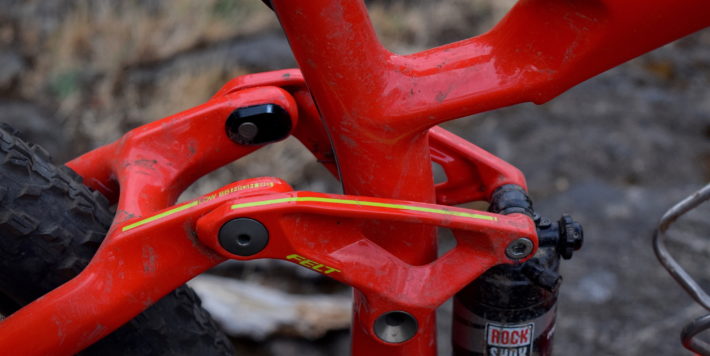 Felt built the Decree 3 around it’s FAST suspension, which stands for Felt Active Stay Technology. A nifty acronym that refers to the flexible steatstays that provide 140mm of rear travel in place of a pivot near the rear dropout. This reduces the weight of the frame, while still keeping the back end of the Decree plenty stiff. As a bonus, it also noticeably improved the pedaling efficiency when climbing seated. 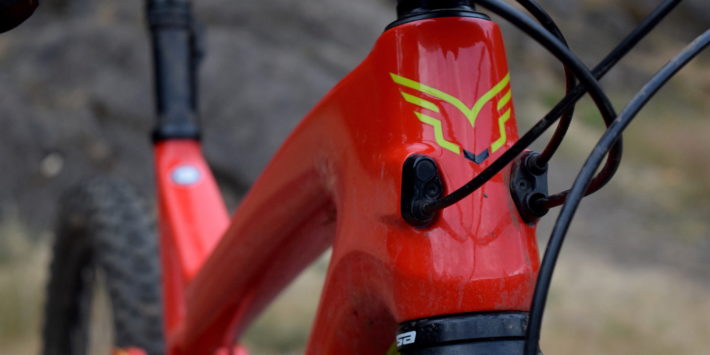 The Decree 3 features adjustable cable routing via interchangeable cable ports. This allows for an upgrade to Shimano’s Di2 electronic system, including a battery storage space, internal dropper post routing, and even the option to run a front derailleur. 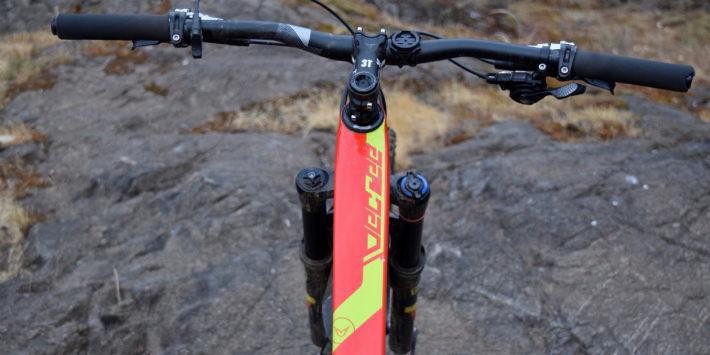 Though incredibly svelte, the Decree 3 is still plenty stiff. This gigantic top tube helps with that 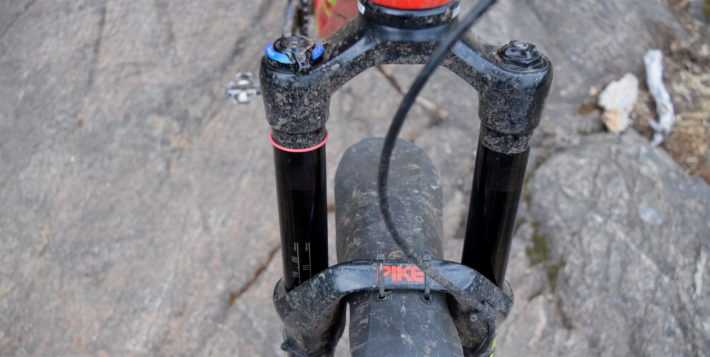 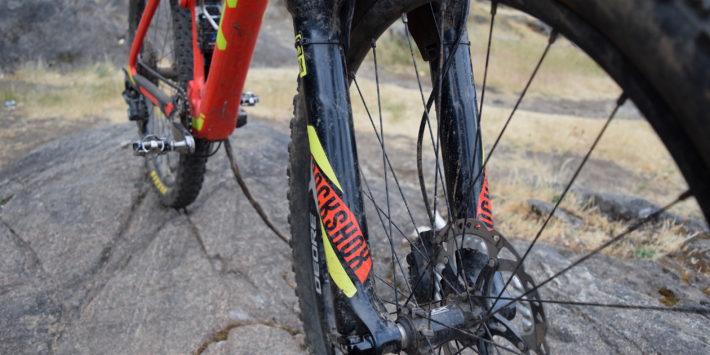 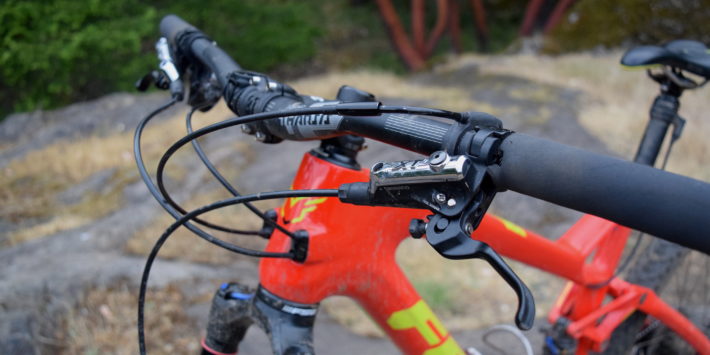 Shimano’s XT hydro disc system provides all the stopping power, with out the price tag of XTR 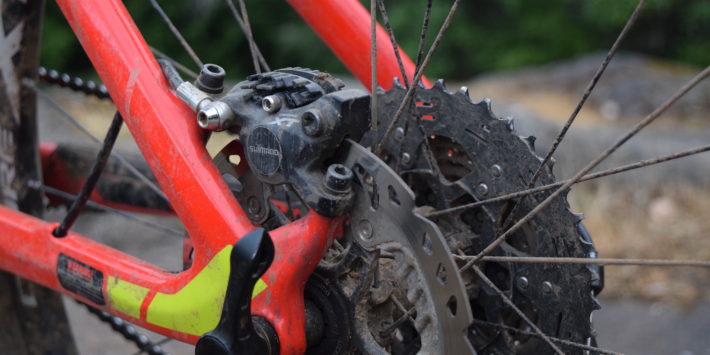 Shimano XT even features cooling fins, both on the pads and rotors, to keep temperatures cool 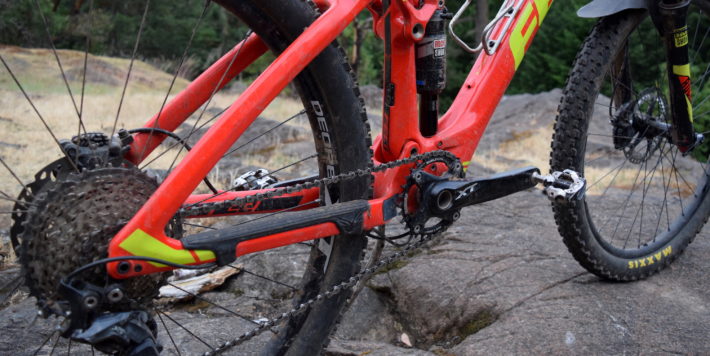 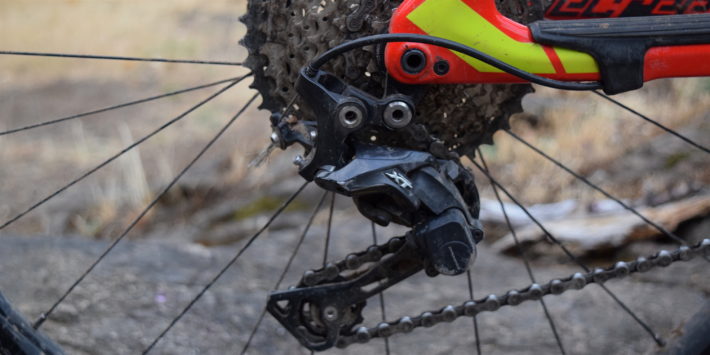 With shimano’s 11-speed clutch derailleur running quietly out back 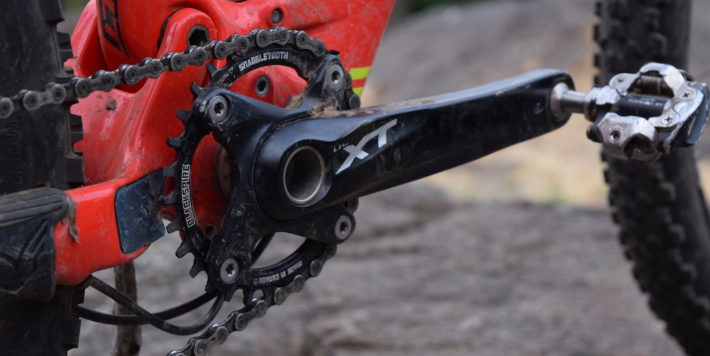 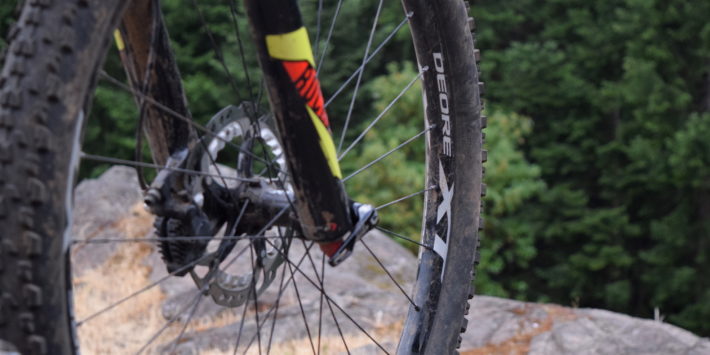 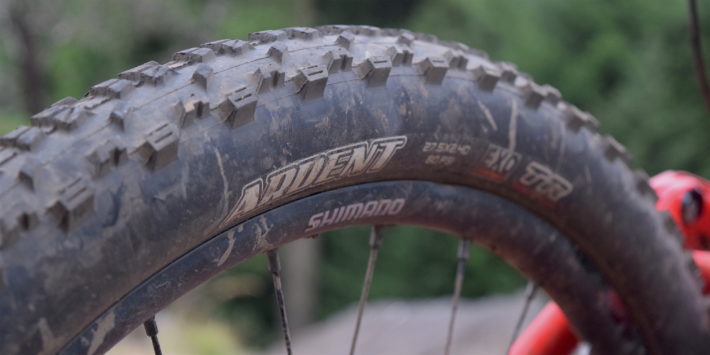 While Maxxis Ardent 2.4’s keep the Decree firmly attached to the trail 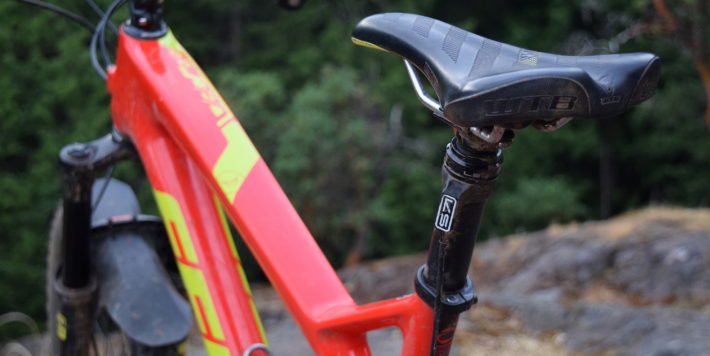 KS Lev dropper comes externally routed, but the Decree 3 has the option for internal routing 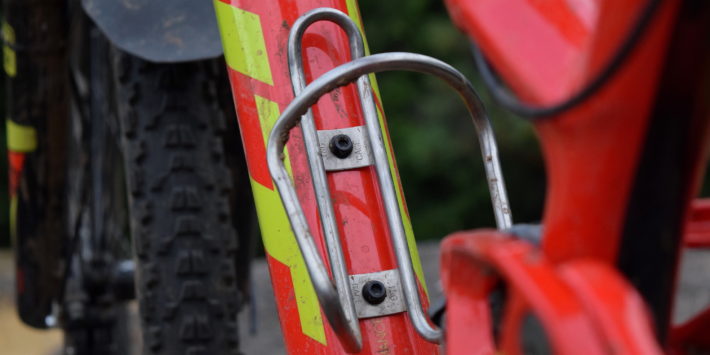 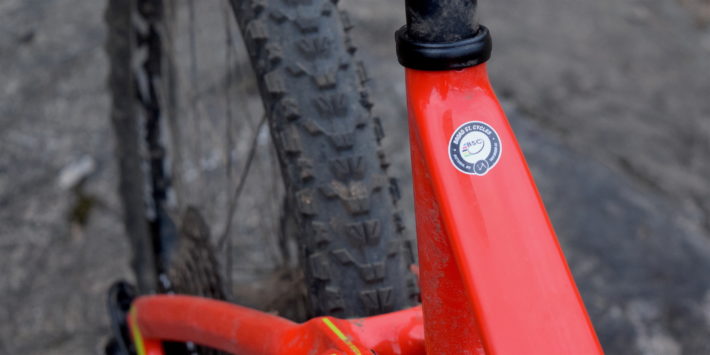